Kilauea’s double eruption continues with no significant changes: Fissure 8 is still pumping out lava,  and the summit is continuing to settle. The ocean entry has expanded to two miles wide, with its southern edge creeping south just onshore.

Here’s a timelapse of all the USGS lava flow maps since lava started moving away from fissures in May:

Fissure 22 is sputtering and sending out tepid little lava flows that don’t go anywhere, while Fissures 16/18 were “incandescent” during the morning overflight.

While the daily collapse explosions at Kilauea’s summit haven’t sent up much ash lately, they’re still giving off a voggy burp of sulfur dioxide. And some of the ash that fell earlier is still blowing around and irritating communities at the southwest end of the island:

The big news today is that the USGS posted new drone footage of Halema’uma’u Crater.

Full video below. If you want extra drama, here’s a version with a soundtrack added.

HVO/Jaggar Museum are the low dun-colored buildings (same color as the bluff they’re sitting on, well-camouflaged) swing into view at the top of the screen around 2:30 and are middle of screen at 2:40 just before it shifts to a new view. (The larger, more conspicuous buildings near the beginning of the video are the old Kilauea Military Camp and the Volcano Golf Country Club).

Here’s an aerial photo of Halema’uma’u from April 13, 2018 for comparison, with Jaggar Museum/HVO at the top of those stairstep bluffs in the background, middle right. Here’s another view of the two buildings.

“A UAS (Unoccupied Aircraft Systems) mission on June 24, 2018, filmed details of the dramatic changes occurring within Halema‘uma‘u crater at Kīlauea’s summit since explosive eruptions of ash and gas and ongoing wall collapse began in mid-May. Clearly visible are the steep crater walls that continue to slump inward and downward with ongoing subsidence at Kīlauea’s summit. The deepest part of Halema‘uma‘u is now over 400 m (1300 ft) below the calderafloor. There are two obvious flat surfaces within the crater that have slumped downward as nearly intact blocks – the shallower one is the former caldera floor and the deeper one is the former Halema‘uma‘u crater floor. Limited UAS flights into this hazardous area are conducted with permission and coordination with Hawai‘i Volcanoes National Park. The overflights collect visual information on what is happening at this rapidly changing eruption site. Scientists examine the footage in detail to understand how the expanding collapse area is evolving, the extent of tephra fall, and other surface changes. This information is used to assess hazards at Kīlauea’s summit , which are shared with the National Park Service and emergency managers. Video by the U.S. Geological Survey and Office of Aviation Services, Department of the Interior, with support from the Hawaiian Volcano Observatory and Hawai‘i Volcanoes National Park.”  — HVO Photo Chronology

Sunrise over what was once lush green forest and farmland:

And fire where open ocean used to be:

From @USGSVolcanoes Facebook post today: “Our latest volume estimate for the eruption so far is about 250 million cubic meters (8.8 billion cubic ft). Sorry for the confusion!”

I wonder how much easier this eruption would’ve been for the USGS staff if they weren’t expected to maintain a social media presence and answer questions (even conspiracy theories and rude accusations) with patience, day after day. One of the geologists who came over from California to help sounds weary. I don’t blame her.

Q: Do lunar or solar tides affect Kilauea’s activity?
USGS: At Kilauea, if an eruption is primed and ready to take place it is possible for there to be a tidal forcing. However, there is zero correlation with solar flares/maxima/minima. You can check out https://agupubs.onlinelibrary.wiley.com/doi/abs/10.1029/GL007i011p00925 … for a more detailed discussion.

The abstract from that paper contains this surprising nugget!

A straightforward significance test indicates that the likelihood of a fortnightly tidal influence on Kilauea eruptions is roughly 90%. This is not the case for Mauna Loa Volcano, where 37 historic eruptions have been distributed randomly with respect to the fortnightly tide. At Kilauea, stresses induced by fortnightly earth tides presumably act in concert with volcanic and tectonic stresses to trigger shallow magma movements along preexisting zones of weakness. Differences in structure or internal plumbing may limit the effectiveness of this mechanism at Mauna Loa.

Which might explain Pu’u O’o’s somewhat regular once-a-month eruption cycle prior to July 1986. (But I don’t know how to calculate the probability that the timing of young Pu’u O’o’s eruptions was influenced by tides.)

The pumpkin orange lava flows of #Kilauea aglow during the predawn hours over the Pacific Ocean. #Hawaii pic.twitter.com/N9k8uVfn6n

Q: Does it show up because it’s hot, or because it’s big, or both?
USGS: “Both! It’s not the biggest lava flow on record for Hawai’i (Mauna Loa wins that prize), but it is large and emitting a lot of thermal radiation.”

Q: How deep is the lava channel?
USGS: “That’s a good question. We don’t have an exact number, but we have been assuming it’s about 4 m (13 ft) deep based on the depth of old lava channels elsewhere on Kilauea and Mauna Loa.”

Just a reminder that they’re monitoring other volcanoes in the U.S. as well. Up in Alaska, Cleveland is making a little noise:

(Person was actually asking if Halema’uma’u would start forming a water lake if it gets down to the water table, but…)
USGS: The lava lake may one day return, but past eruptions have shown us that it might take years. The last time there was no lake at the summit was between 1982 and 2008.

Aha, someone else asked about the same question on Facebook (asking if the water table is about 1700 feet below the main caldera’s floor) and got an answer:
USGS: That’s close to about right for the water table depth. If Halema`uma`u drops below that, we might expect to see water begin to accumulate in the crater. Right now, however, as the crater is deepening, it is also being filled with rubble from the slumping crater walls and rim. We’re not sure which process will outpace the other at this point.

UAS (Unoccupied Aircraft Systems) hover at about 1000 ft above hazardous areas, collecting video and images that are…

Q: Why are all the explosive events 5.3? Are they that similar to each other?
USGS: “Exactly right! The amount of movement on the slumping blocks and the energy being released by each small explosion (which actually look to be similar to the same sorts of seismic events seen in mine collapses) is basically consistent. We’re working on a more detailed explanation of summit seismicity (trends, patterns, mechanisms, outlook, etc.), which we hope to post within a couple of days.”

Q: Will there be larger ash explosions, or will they continue to be minor?
USGS: Current data suggest that the small explosions will continue much like they have been for the past few weeks. We don’t see any indication that they will get larger at this point, although we are tracking summit seismicity and deformation closely in case that assessment needs to be updated.

Here’s a good Discussion on the summit

Q: Has Halema’uma’u’s magma chamber completely drained into the LERZ? When it’s totally drained, will the subsidence stabilize?
USGS: We don’t think that magma has completely drained from beneath the summit — the magma storage capacity is huge (although the shallower and smaller of the two known reservoirs beneath the summit may have drained to a fairly large degree) — but it has obviously drained enough for the chamber roof to become unstable and subside into the evacuated reservoir space. At some point, the pressure at the summit will be so low that magma can no longer be driven to the lower East Rift Zone eruption site and subsidence will subside (eloquent!), but when that will happen is still unknown.
Follow-up Q: When the pressure gets too low to feed the LERZ, will the summit re-inflate? And maybe a new lava lake?
USGS: Our working model is that once the lower East Rift Zone eruption stops, and after a period of requilibration (there is a lot of “open space” in the volcano right now), then we will start to see summit inflation as the magma reservoir begins to refill. The supply of magma to the volcano from the mantle has been relatively constant over the last few decades (with some fluctuations), so assuming that the supply doesn’t change due to this event (we don’t think it will, but we’re always learning more about how this volcano works), then ultimately we should see reinflation.
Q: Someone else asked about the half-emptied upper magma reservoir— which was the lava lake’s source— and whether its empty space is “flattening” as the summit settles down on it.
USGS: We would visualize the reservoir as flattening, and we don’t know how much “open space” might exist at its top. Probably not much, and it’s probably also not a perfect sphere (despite the fact that we usually draw it that way for simplicity). As for the pressure state, we’re not sure at what stage that will occur. We have seen some indication that magma is also draining from the deeper reservoir (based on a broader subsidence pattern at the summit), but that is occurring at a much slower rate than occurred form the upper reservoir.
Q: So it’s like the summit is someone stepping on a ketchup packet? Or is the magma squeezing from below, so it’s pushing the magma out the path of least resistance?
USGS: The caldera floor is actually reacting to the removal of support. So it’s more like a deflating balloon (although we like the imagery of stepping on ketchup packets…). There’s basically a path of least resistance to the lower East Rift Zone, which is at a lower elevation than the previous eruptive vent, and the summit was pressurized prior to the eruption onset. We think that’s why the eruption has been so strong and the summit deflation so massive.

(Ignore the Faux News clickbait headline; see comment by An Actual Geologist ™ below)

Geologist notes an area of higher temperature rock way below the surface.
Literally says: “Come back in 50 million years, and we’ll see what happens.”

Hawaii Civil Defense is back with another overflight photo album from the fire department. In fact, they were very busy today and posted 245 photos and videos. I wonder if they were scouting a possible lava viewing area.

Here is a tiny sample.

Kapoho Crater and the ocean entry across the lava delta again: 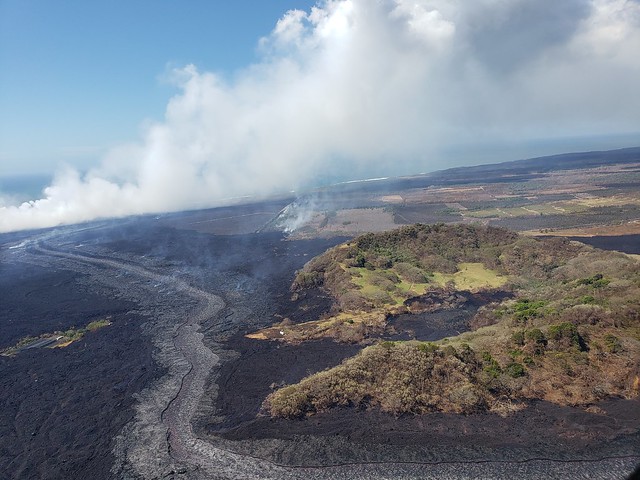 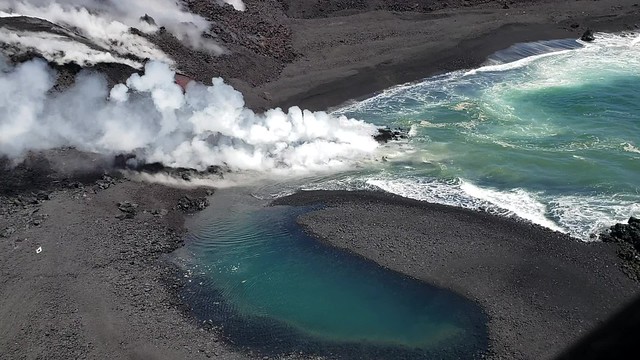 I think this is the first flows that reached the ocean, before Fissure 8 took over:

Puna Geothermal Ventures on the other side of the lava river:

Look at all the tephra on roofs: 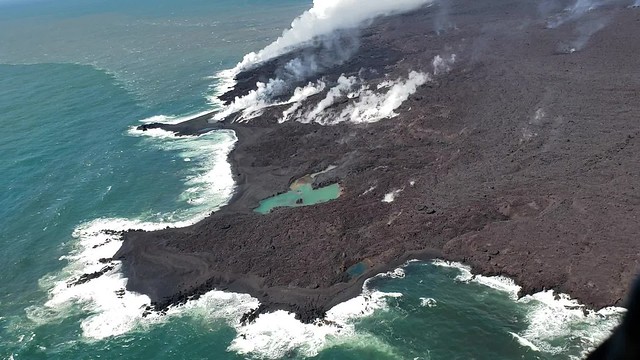 Dispatches from the Volcano examines the changes at Halema’uma’u he’s observed, and that the drone footage shows

Rest of the album here:

Unique observations from this flight included: A stalled breakout on the northern flank of Fissure 8 extending near…