Fissure 8 continues as usual, sending its lava river down to the ocean at Kapoho, with a “dominant ocean entry on the south edge of the flow front…producing a large laze plume.” Minor, brief overflows upstream aren’t traveling past previous lava flows. Fissure 6 is inactive; 16 incandescent; 22 woke up and was fountaining weakly during  the USGS morning overflight.

Seismicity at the summit was “elevated overnight” according to today’s only HVO status update at 8:45 am. There appeared to be a lot of rockfalls/isolated slippages on the livestream today, especially on the left rim, but the really-truly “collapse explosion” (as USGS is now calling them) occurred at 6:52pm, 5.3 energy equivalent, 500 foot ash plume.

I spent this afternoon putting together a gif of the last 28 days of HVO wide angle Kilauea images, using screencaps I’ve taken supplemented with screengrabs from the same webcam archived by Hawaii247: 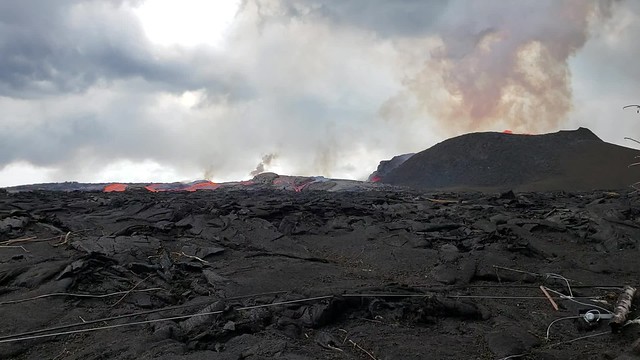 Mike Zoeller, UHI, Center for Study of Active Volcanoes:  We’re using this new terminology, “collapse explosion” for these events at the summit, because they are really a mixture of different processes going on. We’re not 100% sure whether the explosion triggers the collapse or vice versa. So, to cover our bases, we’re referring to them as “collapse explosions” at this time. — June 21, 11AM USGS/media conference call

Q: Some unlucky resident whose house is behind Fissure 8’s cone wants to know chances of cone collapse and flow going back that way.
USGS: The cone appears fairly sturdy at the moment. The more likely scenario is a channel breakout, which could send lava along the local line of steepest descent. Unfortunately, we can’t predict where and when those will occur, but we are monitoring the channel closely for weak spots.

Q: Could large earthquake near Leilani cause perched ponds/levees to breach, sudden outflow?
USGS: It wouldn’t necessarily require an earthquake, but yes, the perched channel and ponds could have levee breaks that would create fast-moving lava flows. We don’t expect that to happen at the same time all along the channel, but we are constantly monitoring from the ground and air to make sure no one is surprised by an outbreak.

Q: Why is lava flow crusting over? Flow rate slowing? Cooler?
USGS: It’s simply a normal process for a lava flow. The difference between the air and the lava is nearly 2,000 degrees F, so the lava is essentially “freezing” on contact with the air.

Q: Compared to other cones around island, is Fissure 8 small?
USGS: They are tens to hundreds of feet in height, so well in line with this cone.

Q: What are the white birds flying in the livestream?
USGS: Our summit teams think they are Koa`e kea.
David Starrett [random FB user, but sounds informed]: They are Koa’e’kea, or White-tailed Tropic Birds. They actually nest in the crater, I have seen them along the wall of the crater on the north west side from the trail near the parking area NE of the Jaggar Museum.

Q: Was Fissure 8’s “well-defined channel” a river-bed before, or just path of least resistance?
USGS: There may have been some small water drainages along the path that the fissure 8 flow followed, but no, there was no major river there. [Lava flows build their own channels/levees!]

Yesterday, USGS announced the alert level of Mauna Loa had been lowered to green, explaining that its seismicity for the past six months is lower than it’s been in years. Today, they’re swamped with “Is Mauna Loa about to erupt?!” questions, even after posting:

A couple of many rumor whack-a-mole tweets today:

USGS: As an active (but not erupting) volcano, #MaunaLoa will have earthquakes as part of its normal, background activity. Since late 2017, rates of seismicity and ground motion related to inflation of shallow magma reservoirs have slowed to (pre-2014) background levels.

Science And Info Around the Web

Notice the tephra on the roofs of houses:

A familiar sight in Hawaii, but it used to be nearer to Pu’u O’o:

“Upwelling” patch showing where lava is on ocean floor:

I missed yesterday’s. It’s too impressive to skip— and a great view of the upwelling process offshore at the 2:10 mark.

June 22: The colors in this are beautiful (and there’s rainbows) but this one’s more atmopsheric than detailed. That said: 1:55 really good view of Kapoho Crater and what Green Lake looks like now.

Here’s Mick’s notes for this flight Also, Bruce Omori posted still photos from this overflight on the Lava Update blog, including one glimpse of glowing Fissure 22 (which we got to know so well during the Lava Rooster Livestream).

#LeilaniEstatesEruption #KilaueaVolcano UPDATE: New video from #KalapanaCulturalTours as USGS reports lava delta filling what was once #KapohoBay is now about 370 acres & has reached areas where the water is nearly 200 feet deep! https://t.co/Se7DnGLWeJ @HawaiiNewsNow #HINews pic.twitter.com/tdM7AbdnFW

Methane gas burning through a crack in the road on Kahukai street in Leilani Estates subdivision on the Big Island of Hawaii. #leilani #puna #kilauea #volcano #methane #hawaii #gbradlewis

This is looking directly into an inactive lava fissure inside #LeilaniEstates. #KilaueaEruption #Hawaii https://t.co/tE4HfLkaVG pic.twitter.com/5ey9Xq5deI

It's hard to have that #FridayFeeling with so much loss & despair among the ruins of #LeilaniEstates caused by the #KilaueaEruption. We hope these people that lost or are losing their homes find peace and comfort soon. pic.twitter.com/ohVTbOYaKm

See it?
Daytime view of #KilaueaEruption from just outside of HiloBay. pic.twitter.com/syZA5K7hGr

People were watching the glow of fissure #8 from Pahoa.

Lava trees. The glow is from the fissure #8. #hawaiivolcanoes #bigisland #lava

20180621 Hawaii Army National Guard – Leilani Estates and Hwy 130/132 “Y” Junction . Moku Street continues to be peppered with ash, reticulite, cinder, and Pele’s hair throughout the length of Leilani Avenue and Malama Street. Fumerole sites near the end of Moku Street continue to stream white steam and gas next to large, deep cracks severing the entire passage of asphalt. Luana Street on the southern side of Leilani (Malama Street) was not accessible due to heavy amounts of gas. Views of Fissure 8’s large and vigorous lava channel streamed brightly with lava fountains from the 170 ft-tall Fissure 8 spatter cone pulsed to heights of 185 to 200 ft overnight. The opposite side of Luana Street intersecting Kahukai Street revealed heavy thermals distorting a direct view of Fissure 8’s northeastern side vent. Hwy 130/132 “Y” Junction also revealed a similarly distorted view of Fissure 8 with thin views of the lava channel between us. . Today marks seven weeks of our eruption. It has been truly inspiring to see how we are all keeping our community together through a very difficult time. Thank you to everyone who has helped to make this experience brighter, we are doing an outstanding job supporting each other. . Mahalo to Major Jeff Hickman​ / @hawaii_armynationalguard for making it possible for us for us to safely document this eruption with a great deal of respect to visit sensitive areas. Aloha to Major Christine Rosalin, we can’t wait to work with you and your excellent team! Your media tours are great wealth toward our local community awareness. . My respect and best wishes go out to the neighborhood of Leilani Estates, Lanipuna Gardens, and the areas within and between Kapoho. My heart especially goes out to all of my friends who have lost their home. ___ #eruption #bigisland #lava #kilauea #leilani #volcano #fissure @hawaiinewsnow @natgeo

And a final thought…

Tay Austin has been listening to the Hawaii County disaster coordination radio channel since the beginning of the eruption.

I wish you could hear the voices of those who fly the drones. They truly do use every bit of skill they have to get the info they are asked to obtain, but there's also a humble solemness for the devastation around them. Sometimes I think even they are awed by what they see.