Madame Pele picked less-than-broad-daylight for the first daytime explosive event since the livestream’s been added, but at least we caught a glimpse.

USGS caption: “On June 15, 2018, a small explosion occurred at Kīlauea’s summit at 11:56:39 AM HST. The event was captured by a live streaming camera and that footage is presented in this video clip. The earthquake starts at about the 0:39 mark of the video. The earthquake causes the camera to shake and over the course of the next few seconds, the rim of the crater subsides in several places, and numerous rockfalls occur (watch the crater rim at the lower left). Rockfalls also spall from the opposite wall of Halema‘uma‘u. After the earthquake, the video accelerates to 20x to show the plume of ashy material that results from all of the rockfalls and subsidence.” 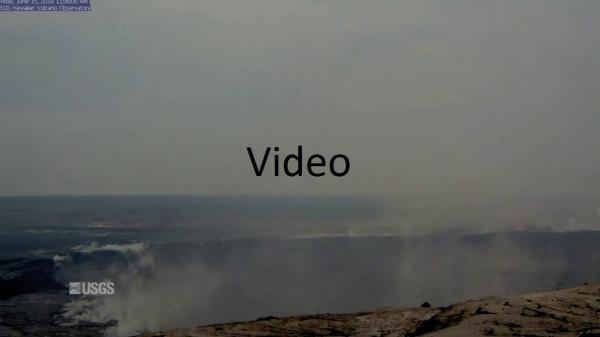 While it looks like it’s not gobbling up land quite as quickly as it was, “the lava flow front at #Kapoho is very broad and some of the lava is erupting underwater, which may account for the appearance that the eruption is slowing, but we haven’t seen any decreases in output from fissure 8 yet.” — USGS

USGS isn’t and weekends anymore unless something big happens, but today the National Park Service (displaced rangers from Hawaii Volcanoes National Park) put out a suitable-for-all-ages informative video of the eruption so far:

Ah, here’s why Fissure 8’s cone doesn’t yet have a name: “There’s no particular point at which it gets named – the only condition is that the cone has to persist once the eruption is over. The #USGS doesn’t get to name it; rather, it’s the community and local elders who decide.”

Also not their call: decisions about “public viewing areas” or platforms. “We can advise @CivilDefenseHI on what areas are safer to access than others, but they make the decisions on what’s restricted and not.”

It seems to be a bit more common on Mauna Loa, but that doesn't mean it's unusual for Kilauea. Fissure eruptions do sometimes focus on one vent, and channelization is a common behavior for a lava flow.

Here’s why the lava channel is not making a lava tube: “The lava flowing outward from fissure 8 is too voluminous and fast for crust to form on the top. That the channel is open rather than roofed over is a factor of turbulence/friction in the flow.”

Also, while the summit’s deflation is indirectly related to its magma moving down into the East Rift Zone, “we haven’t seen a clear pressure connection between summit events and fissure 8’s activity. Magma is moving into the Rift Zone at the same rate it’s moving out – a steady state of flow.” — USGS

The latest Kilauea summit radar was released late yesterday. The accelerated slumping on the NW side of old Halema’uma’u is sobering:

May 29 was about when this once-a-day-explosion pattern really settled in.

Despite this drawdown, HVO scientists expect lava to return:  “In the past, activity has shifted away from #Halemaumau to locations farther downrift, persisted for a while, and then moved back to the summit (see [link] for the history). Fissure 8 may last for a while, but it’s not likely to become the main eruptive center.” (They said much the same thing to someone asking if Halema’uma’u’s collapse was the “death of the volcano.”)

I’m relieved to hear HVO is hauling away irreplaceable items: “The #Halemaumau crater is already expanding toward HVO, and earthquakes have damaged the Observatory. Important historical materials are already in the process of being relocated to a safe storage location, so yes, we would make sure all of that is protected.”  I trust Jaggar Museum is part of that effort. Because it looks like there’s an outside chance it could become part of the crater floor.

Great question posed to Hawaii Volcanoes NPS, even if there’s no definitive answer yet:  “With hundreds of earthquakes on a daily basis, the Thurston Lava Tube may have sustained damage, but there has been no assessment done since the activity continues.” (For those who don’t know, it’s an ancient lava tube large enough to walk inside, from a 70-year eruption in the 1400s. Which makes me think it’s pretty durable.)

I’m going to stop posting CD alerts unless they post specific eruption info. But I see they just posted a June 15 overflight photoset. One vid & five photos on a moody, stormy day: 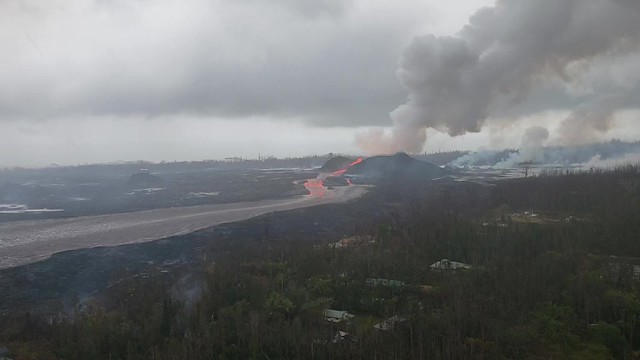 From residential neighborhood to lava lake:

Future tidepools, if ocean & lava both agree to leave them be:

Roads on the 1960 Kapoho eruption disappear under the lava of the current one:

Some farms are holding on:

Here’s Mick’s comments for this video.

So glad I finally stumbled across Dispatches from Volcano. Bite-sized eyewitness reports from a native Hawaiian perspective.

This is what the ocean entry looks like right now. 5pm on June 15. 2018. Now you know. I miss Kapoho Bay to tears and always will. Not to mention legion other loved places. #lavaflowsintoocean #kilauea #volcano #puna #kapoho #hawaii #gbradlewis

Halemaumau, then and now. It’s amazing what can happen in a decade on Kīlauea Volcano. Now it’s the time of continuous earthquakes at the summit. Stay tuned….. #halemaumau #kilauea #caldera #hawaiivolcanoesnationalpark #hawaii #gbradlewis

Looks like I’m not the only one scrabbling for then-and-now photos of the summit. But GBradLewis has his own photos to choose from. (Note that his is from further up so one can see the rim of Kilauea caldera, with Halema’uma’u inside of it.)

A certain resort on Hawaii's Big Island that claims to be more than 100 miles away from the volcano (they're really 68 miles away) & brags there's no impact at its resort has quietly disabled webcams showing today's bad vog …at their resort. 🤔😂 #KilaueaEruption

#LeilaniEstatesEruption #KilaueaVolcano UPDATE: What does a river of lava look like?! Incredible footage by Tara Crystal captures how fast-moving the flow produced by #Fissure8 in #LeilaniEstates is as it travels across the #LERZ https://t.co/uLLKx2wPQf @HawaiiNewsNow #HINews pic.twitter.com/bCdspxBRjl

Volcanoes that erupt all the time tend to be better-behaved, because they’re less constipated.

I just can’t let this go can I