Last night, USGS scientist Steve Brantley explained the current eruption in an informative 10 minute talk. I transcribed it as a separate post, but here’s a rough summary: Magma heading down to the Lower East Rift Zone is causing the summit to deflate. Deflation is causing a pattern of more and more earthquakes over 30-50 hours until the summit releases the strain with an explosion, accompanied by an ash cloud.

Sure enough, there was an M5.6 explosion and 10,000 foot ash cloud at 4:32pm. HVO’s Twitter account had a great impromptu Q&A session about it (see below).

Meanwhile, down in the Lower East Rift Zone, Fissure 8 shows no signs of slowing. It’s wiped out Vacationland and nearly all of Kapoho Beach Lots, and is continuing to create new (crumbly, hazardous) beachfront real estate.

USGS has also been posting some striking imagery today.

Video description: “HVO’s mid-day overflight on June 5 shows ongoing partial collapse of Halema‘uma‘u at the summit of Kīlauea Volcano. To the north of the former visitor Overlook parking area (closed in 2008) is the site of the former lava lake—now a deep hole piled with wall-rock rubble. The western portion of Halema‘uma‘u has moved down and toward the center of the crater as new cracks form on the caldera floor to the west. Kīlauea’s summit continues to subside due to withdrawal of magma towards the volcano’s East Rift Zone.”

More images, lots of great geology info below the cut. But first, a 2-minute USGS briefing, since we skipped yesterday’s:

THere She Blows: Summit Explosion

Replies to this tweet answered my questions about what, exactly, these explosions are, since the USGS keeps saying they’re not earthquakes, but “pressure waves” or explosions that seismometers register as earthquakes.

More to follow. There is a pattern of increasing pressure and increasing earthquake frequency and magnitude leading up to explosive events. They are occurring about 1X per day. We were waiting for this one…

We think that it is mostly old rock or recycled recently formed lavas, but there may be a small component of new magma. It's hard to tell until we've done a more thorough analysis of what's being erupted.

Not quite. The lava in #Kilauea's Halema'uma'u crater has dropped down very low in the conduit, and the conduit is now choked with rubble. Gases building up beneath the rubble, and can either explode on their own or be encouraged by rockfalls. #KilaueaErupts

And a clarification to someone else’s secondhand report:

Not an earthquake in the classic fault-rupture sense. This was an explosion signal from the summit.

Someone trying to understand why the summit’s deflating manages to summarize the last five weeks in one tweet:

That's about it! Good summary.

Reaction to the new photos of Halema’uma’u:

We do think more collapse of #Halemaumau is likely to occur. With continued deflation, frequent earthquakes, and additional explosions expected, things could change even more dramatically before the #Kilauea summit explosive phase is pau.

Yet another patient reply to a zombie conspiracy theory that just won’t die:

A collapse now is very unlikely. The south flank has been moving towards the sea for thousands of years, and there's a history of large earthquakes there – much larger than the May 4th event (there was a M7.7 in 1975, and a ~M8 in 1868). Tsunamis can happen without collapses.

International Charter for Space and Major Disasters https://t.co/2aErssOVkZ is a means for global space agencies to help with disaster monitoring by providing satellite data to responders and scientists on the ground. This #Kilauea #LERZ radar map is a result of that effort. pic.twitter.com/TWXhLseS9M

3D Model of the Summit Crater As of June 6

The USGS has used thermal data to post a new 3D model of the shape of Halema’uma’u Crater. Really neat.

Caption: “This 3D thermal map shows the new geometry of Halema‘uma‘u Crater. Magma in the summit magma chamberhas drained over the past month due to Kīlauea’s lower East Rift Zone eruption, causing much of the floor and rim of Halema‘uma‘u to drop or collapse. These changes have resulted in a much deeper crater, with rubble covering the floor. The deepest part of the crater is 280 m (920 ft) below the former level of the crater floor.”

In addition to the new Halema’uma’u Livestream, it looks to me like someone wiped off the Pu’u O’o webcam (or, more likely, the ash on it dried out and blew away). As I’m typing this post (noon, HST) the view’s pretty clear:

Okay, back to the Lower East Rift Zone. Fissure 8 fountaining 130-210 feet; ocean entry at Vacationland; no other Fissure 8 lobes are active; no other fissures are active; small summit explosion at 4:07 PM HST; summit sesimicity is currently low. pic.twitter.com/afCswjXhma

From the USGS morning overflight…

Fissure 8 is still pumping out an incredible amount of lava:

Those are in fact paths (and possibly roads) over the lava flow created by the 1960 #Kapoho eruption. 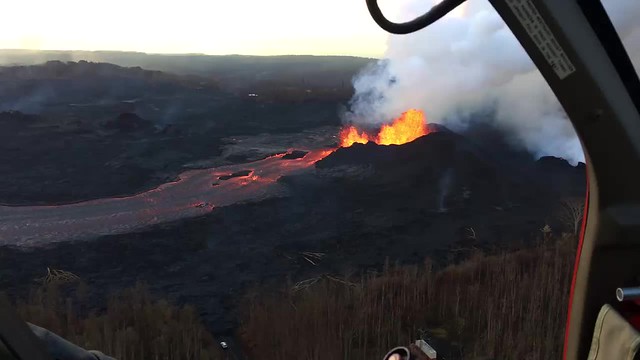 I transcribed the USGS presentation in a separate post, but BigIslandVideo has put up videos of other segments of this meeting as well:

(Turn down sound; windy but impressive video from HNN reporter):

#LeilaniEstatesEruption #KilaueaVolcano UPDATE (June 6 at 6 AM): Our #HawaiiNewsNow coverage from what is left of Kapoho Bay continues this morning as lava continues to pour into the ocean — filling most of it and creating a lava delta that USGS HVO geologists estimate is 0.8 miles long. Officials say an estimated 500 homes have been lost in what is believed to be the single most destructive day of any eruption in modern times. Hawaiʻi County Civil Defense Agency officials say census numbers estimate as many as 350 houses were built in Kapoho Beach Lots and about 150 were in Vacationland. From our vantage point in the water, most of that area is now covered in lava — including Wai o Pae or the Kapoho tide pools. A large laze plume is blowing inland into the air along the coastline. Laze or lava haze is created when hydrochloric acid is formed releasing tiny glass particles into the air after lava makes contact with ocean water. The health hazards of laze include lung damage, along with eye and skin irritation. Officials warn that the laze plume travels with the wind and can change direction without warning. When the laze plume cleared we could make out a few houses still standing on the north side of Kapoho Beach lots. We could also make out the fountain from fissure 8 glowing the distance more than 6 miles away. Despite USGS HVO reports indicating that the fountain appeared to be losing intensity and height — we were stunned by how clearly we could see it from Kapoho Bay. We also observed dead fish and sea turtles floating on top of the water, which has changed color in some spots to a murky green and dark gray. Stay tuned to @HawaiiNewsNow for the very latest developments #HInews #HawaiiNews #HNN #HawaiiNewsNow #WeAreYourSource

As Hawaii County & the state discuss what to do about hundreds of eruption refugees, the first temporary housing project is already being built in Pahoa & is expected to start housing evacuees as early as June 15. It's all been done w/ out government help @HawaiiNewsNow #Kilauea pic.twitter.com/7vs38YMXUS

Two weeks down, one more to go in Kilauea's Lower East Rift Zone. Haven't had time to post because I'd have to remove 15 layers of personal protective equipment to type anything. pic.twitter.com/br7MDWgN6Z

Satellite image of Kilauea’s summit that shows how much Halemaumau Crater has grown (📷 @DigitalGlobe) pic.twitter.com/fmvsjAfcCq

20180605 @ 14:30-19:00 Noni Farms Road / Papaya Farms . A slow moving flow front on Noni Farms Road from Fissure 8 continue to edge into properties. Cows, sheep, and goats were being transported and herded out of Noni Farms in multiple trailers and vehicles from backbreaking community effort. A’a began approaching a wide section of northern Noni Farms Road and continued to flow into a deep 30-40ft wide crack large enough to divert a portion of the flow into a linear northeast pathway, away from homes and cultivated farmland. There is no doubt that this crack has spared many properties. Clinker a’a continued to descend in the crack at ~25ft/hr with audible sounds similar to ceramic plates crashing. Surrounding portions of the flow around the large crack were not advancing and continued to cool with few streams of gas, smoke, and steam in dense portions of the flow. Several toes of a’a lay dormant from the aggressive movement days earlier which intersected and engulfed many backroads and expanses of agriculture. Some homes were lost in this flow while others stood inches away from the dark, sharp crumble of a’a. Some of the descriptions of farms shared today were unfathomable as large swaths of hot rock replaced shelter and sources of income for many families. . All areas that I have documented throughout this eruptive series have been through approved with legal access. Please kokua and do not attempt to trespass in areas unless official approval has been granted. The majority of my efforts are without pay and all expenses are out of pocket. The content shared is being shared without cost to our local news networks for community awareness and support. Some footage does help to pay a very small portion of my expenses. . My respect and best wishes go out to the neighborhood of Leilani Estates, Lanipuna Gardens, and the areas within and between Kapoho. My heart especially goes out to all of my friends who have lost their homes in this fissure eruption. I just cannot comprehend the sheer immensity of this fissure eruption, many areas are becoming unrecognizable. I am at a loss for words. ____ #eruption #leilani #lava #nonifarmsroad #volcano #fissure #bigisland

As Kilauea Volcano erupts on Hawaii's Big Island, it's good to see that after a similar eruption years ago, determined residents returned and rebuilt their homes on the hardened lava. 📸 Diana Streak @HawaiiBigIsland @KilaueaMountain pic.twitter.com/yhBUjo6xKo