“Since late May, these collapse/explosion events have rarely produced significant ash plumes rising more than 10,000 feet above sea level where they can pose a significant hazard to aviation. For this reason, HVO is reducing the aviation color code from RED to ORANGE.”

I almost feel like the recent code downgrades for Kilauea and Mauna Loa were a tacit rebuttal of the scaremongers trying to conjure an island-wide catastrophe out of hot air. But I suppose I’m being as irrational as they are. There were specific numbers and criteria for both these status changes.

Down at the LERZ, status quo continues. Fissure 8’s lava fountains are vigorous but seldom peep over the cone they’ve built (now 180′). Minor overflows spill out near the head of the lava river without going far. The ocean entry is concentrated mostly at the main lava channel channel near the south end of the lava delta, but some fans out along a 1km stretch.

Today’s collapse explosion went off at 4:12pm, M5.3, partly hidden on the livestream by a dust cloud from rockfalls 4 minutes earlier. Just as yesterday, I noticed the “collapse explosion” started with a visible camera shake, unlike earlier rockfalls that made me think, “Waaaaait— was that it?” The explosion itself didn’t send up much dust past the rim of Halema’uma’u. About a minute later, dust from caldera wall rockfalls (I think?) blew past.

Below: Rockfalls, dust cloud, then I fast forwarded to the collapse explosion.

Here’s a photo from Volcano House (I think) showing yesterday’s rockfalls off the bluff where HVO and Jaggar Museum are located:

Prelude to today’s “collapse explosion,” posted just after it shook the summit (must’ve been screencapped just before it):

It has been an extremely active day at Kilauea's summit, with over 350 earthquakes greater than M2.5 in the last 24 hours. pic.twitter.com/slU6Ca63KB

Another view of Jun 23 collapse from Volcano House:

Questions & Answers
Q: Why are all the collapse explosions about 5.3 magnitude?
USGS: A certain threshold of pressure buildup could be needed before these events can happen. If that pressure is the same each time, then the energy output would also be the same. That’s just one option being discussed, however – it may be that a different mechanism is in play.

Q: Fissure 8 -is it a spatter cone or cinder cone?
USGS: We have been using the terms interchangeably.

Q: BBC says lava is endangering more homes… where?
USGS: Our field crews have not reported any breakouts endangering homes. The flow front at the Kapoho ocean entry is still active and may be expanding, but we have not noted substantial expansion of the flow there.
Followup: For the past few days, we have seen roughly the same output, it’s just that activity has been concentrated at the ocean entry rather than the margins of the flow front.

(Reminder that HDOT has set up a thermal webcam on this spot.

G. Naughten on Facebook: Are there any places you can mention that have had theses many earthquakes? I’d like to find out how their structures did. I live in Volcano Village. BTW, the last two “collapse explosions” felt more in the m6.0 range not the obligatory m5.3.
USGS: It’s not unusual for active volcanoes to have this many earthquakes during an eruption – it’s just that not many have a town as close to the action as Volcano. We imagine that prolonged earthquakes do take a toll on structures. And it is possible for those explosions to feel stronger even if they are registering as the same magnitude each time – they might be slightly shallower, or the energy might be directed differently. We’re sorry you’re having to put up with them!

Q: Will [summit] earthquakes increase in magnitude?
USGS: At this point, we have no reason to believe that things won’t continue as they have been for the past several weeks. We aren’t seeing significant changes in deformation rates that would lead us to believe that anything is about to change with respect to the earthquakes (either with them getting stronger or weaker).

Q: Would be interesting to compare volume of collapse at summit with volume of lava erupted from LERZ.
USGS: These volumes are actually pretty similar, but it’s a very imprecise measurement. This is because measurements of the volume loss in the subsurface don’t take into account things like the fact that magma is compressible (because it contains dissolved gases). This complicates the volume calculations immensely, and we are still trying to nail down realistic numbers that account for such complications.

Q: How porous is lava? When it consumes things like cars and houses, do the chemicals leech out into the flow? Can the chemicals then be released into the water table or ocean?
USGS: The lava flows are fairly porous – this kind of basalt contains a lot of bubbles. But because the lava still holds a lot of heat, and was probably above 2,000 F when it erupted, any chemicals will probably have long since combusted or vaporized. There’s not a lot of chance they would make it to the water table or the ocean.

Q: Is lava radioactive?
USGS (Facebook, can’t link): Basaltic lava isn’t radioactive, except in extremely small amounts from certain elements in the crystalline minerals. Even then, it wouldn’t be detectable by typical radiation monitors.

Q: Viral video of laze-generated lightning in current Galapagos eruption— is it real? Has this ever happened in Hawaii?
USGS: Wow! That’s quite a video. As far as we can tell, it’s not doctored. Volcanic lightning occurs when static charges build up between glass particles in a plume (https://volcanoes.usgs.gov/volcanic_ash/lightning.html). Because laze plumes contain bits of glass, they behave much like plumes from explosive eruptions at a vent.

Q: Are Mauna Loa and Kilauea connected?
USGS: Many people have wondered what affect the current activity at Kīlauea has had on neighboring Mauna Loa. The M6.9 earthquake on May 4, 2018, was caused by slip of the south flank of Kīlauea toward the ocean. This large earthquake pulled the ground surface all over the island of Hawai‘i, including Mauna Loa, slightly to the southeast, with areas closest to the earthquake epicenter moving the most. Further, the rapid deflation of magma reservoirs beneath Kīlauea’s summit is currently pulling the ground towards that area and this slow motion is evident at GPS stations on Mauna Loa, especially on its southeast flank. None of the activity on Kīlauea has had any discernible effect on Mauna Loa’s magmatic system.
Response to followup question: The magma reservoirs of Kilauea and Mauna Loa are not connected, that is correct. There is some evidence that while one is active, the other is quiet, but in this eruption we have seen no evidence for direct impacts of Kilauea on Mauna Loa – no matter what the conspiracy theorists claim.

Q: Are these light enough to explain the chunks seen floating beyond the ocean entry?
USGS: Yes – that’s right. Pumice that forms from more silica (glass) rich lavas will collect on the ocean surface as pumice rafts. In order for pumice to float it has to have many individual bubbles that hold air – it’s the amount of air in the rock that makes it less dense than water, so it floats. The pumice that forms in Hawaii has bubbles that are interconnected, rather than isolated, so the pumice sinks!

This somewhat contradicts the answers we got yesterday, when @USGVolcanoes said the lava boats were formed from pieces broken off the cone/levee sides, whereas floating pumice was formed by “a different process.” I suspect whoever answered today thought “these” referred to pumice.

Has volcanic activity on the planet been increasing? NO https://t.co/C6NtYddulf

.Conspiracy theorists were out in force today, including the “hiding earthquakes” contingent. This @USGSVolcanoes response to the “PGV caused the eruption” conspiracy theory is particularly on point:

USGS: Not at all real. PGV was there b/c they were able to tap into heated rocks of known magma storage region of the East Rift Zone. ERZ erupts – fact. #PuuOo magma storage failed & pushed magma to lower ERZ – fact. Path of least resistance to surface in #LeilaniEstates – fact.

[Reminder that PGV is not IN Leilani Estates.]

As usual, facts fell on deaf ears. Public outreach can be a thankless job.

Pu’u O’o outlasted the space shuttle that took this image by 6 years:

From Other govt Agencies

Civil Defense alerts were the usual today, except they’ve added a new sentence to the bulletin they post after a summit explosion: “Due to frequent earthquake activity, residents in the Volcano area are advised to monitor utility connections of gas, electricity, and water after earthquakes.”

Once again, Hawaii Civil Defense’s Flickr is posting great photos from the Fire Department. Album:12 overflight videos from 06/22/18. Also 12 new photos they forgot to stick in that album.

Kapoho Crater and the Cinder Pit: 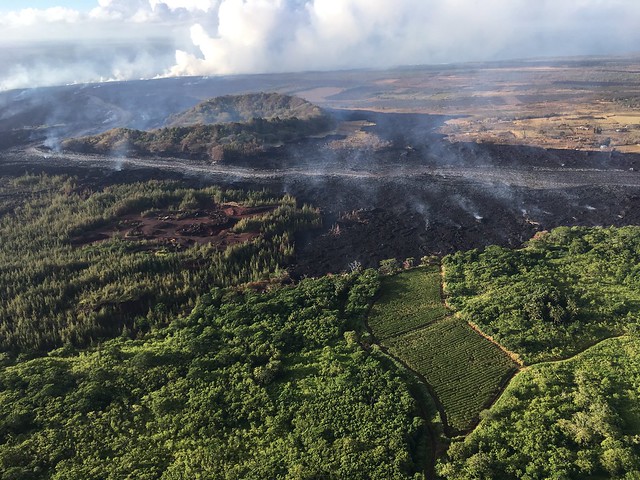 Pohoiki Boat Ramp (was all that black sand there before?) 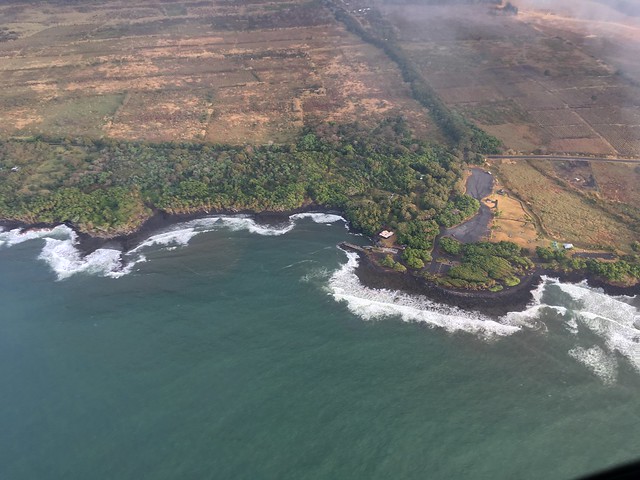 Northern margin of the flow seems to have stopped just south of this remnant of Kapoho Beach Road (1960 lava flow on the right, with roads on it). 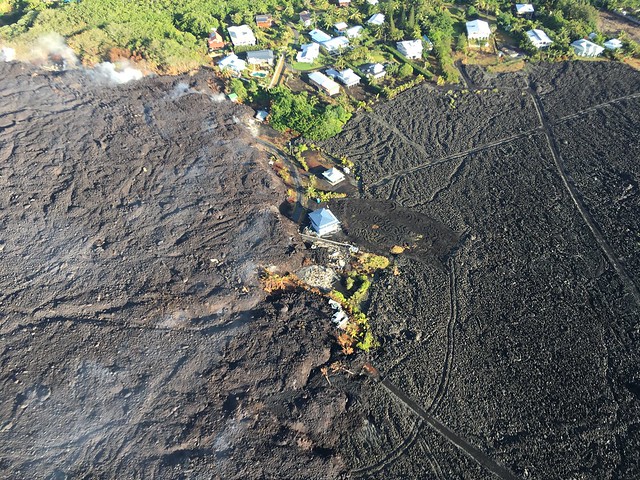 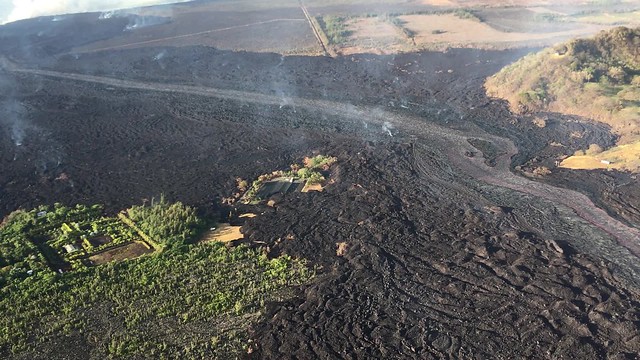 And a view lava photographers can’t get because they’re not allowed to fly this low: 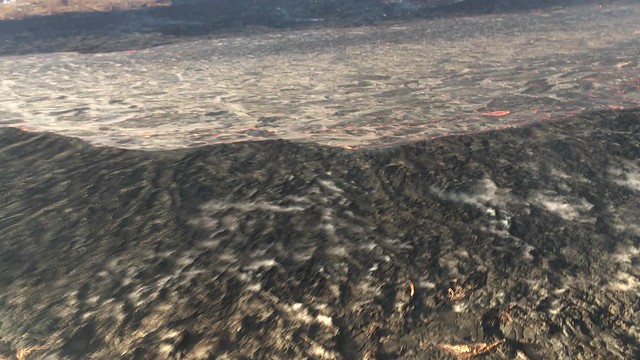 For May “Lava Livestream” watchers, this clip shows the house.

Fairly pedestrian Dispatches from Volcano today instead of his usual poetic musings, but our eyewitness to Halema’uma’u has personal observations of what it’s like up at the summit, as usual.

Also— heeeey. He pointed out that a relic of the old 1990s HVO website has one summit webcam listed that’s not on the new one— and apparently it still works? I’ll have to check in daylight. Gosh, if this is real, I wish we’d known about it sooner; it looks like it has a slightly different view of Halema’uma’u.

Sunday, June 24, 2018, 5:45 am – Kilauea's east rift zone overflight: Dozens of rivulets of lava enter the sea at Kapoho, creating the newest real estate on the planet.

And while lava photographers let us marvel at natural beauty, @TheWeatherBoy never lets us forget the cost to people and critters:

The top image is from Google Maps; the bottom image is the one we captured inside of #LeilaniEstates showing the same area destroyed by the #KilaueaEruption. This is on Moku Street, where sulfur is hissing through the ground in growing cracks. So. Incredibly. Sad. #HIwx pic.twitter.com/EduYbUqOg4

Another sad before (from GoogleMaps) and after (we shot) inside #LeiilaniEstates. This view will allow you to appreciate the magnitude of the 180' tall wall that Fissure 8 from #KilaueaEruption has created. pic.twitter.com/px9fCRHDRd

Inside #LeilaniEstates where #KilaueaEruption continues. Thank you to National Guard for bringing us in & keeping u… https://t.co/CITIRpBOm7

Being a volcano photographer has been a satisfying career choice. The Pu’u o’o eruption and geothermal protests in the early 80’s jump-started my career. It’s been a wild ride ever since, opening so many doors. Being intimate with Nature has always been my priority. Feeling so grateful. Pictured here is @carstenpeter on Luana Street in Leilani estates as a fast moving lava flow from the reactivated fissure 8 vent sends sheets of pahoehoe through the neighborhood. The eruption continues unabated. #leilani #puna #kilauea #volcano #hawaii #gbradlewis #aloha