Thanks, Dad. I was supposed to be giving you presents today!

When our followers create great animated gifs of change at Kilauea Summit! 🤗 https://t.co/mMoEwqtqY0

The Lower East Zone’s unnamed giant booms in its cone, fountains rising to 165 feet, lava cascading out of it at 15mph. USGS: Pu’u continues to make bid for naming. (Full-sized)Fissures 16/18 keep oozing or spattering. “Incandescence (visible in PGcam to the left of fissure 8 most nights) and mild spattering were observed from Fissure 6.”

bLet’s see. Are you there tonight, Spot?

“Observations are also collected on a daily basis from cracks in the area of Highway 130; no changes in temperature, crack width, or gas emissions have been noted for several days…”

At the summit, the daily subsurface explosion occured at 6:26am HST. “The resulting gas plume, reported to be brief and nearly devoid of ash, was observed to 5,000 to 7,000 ft above sea level.”

This is the eighth day in a a row the daily event has released the energy of a 5.3 earthquake. For the month of June, they’ve all fallen in a range of 5.0 to 5.4.

“After this morning’s explosive event, seismicity at Kīlauea’s summit is slowly increasing. Inward slumping of the rim and walls of Halemaʻumaʻu continues in response to ongoing subsidence at the summit.”

Below the cut: a little local news, one of Mick Kalber’s best overflights of the Fissure 8/Kapoho area, and the work of a must-see photographer.

Once again, Mick Kalber brings us some amazing views, clearer today than for a week or so thanks to lessening vog. Go to 1:10 for overview showing Fissure 8, the lava flow and surviving houses. Also be sure to check 2:38!

For the past two days, social media’s been buzzing with speculation as people try to calculate the speed of lava from a viral video. All the guesses I’ve seen were much too high,   USGS weighs in with field measurements. (Using drones with cameras pointed down at the lava, or at least that’s what they did last time.)

15mph is still impressively zippy for, you know, rock.

Aha! USGS explains the optical illusion that’s been puzzling me for days: “These “standing waves” have been occurring in the lava flow near the #fissure8 vent exit. The rolling illusion is a factor of turbulence, velocity, channel constriction, & channel margins. Water does this also, but bits of cooled material on lava surface make it appear to roll.”

Dad also sent me a photo of spectators standing nearby, watching lava slowly trickle out from the margins of an a’a lava flow in Kalapana. There was only the barest wisp of laze.

So much about this eruption is like things seen at Kilauea in the past century, but scaled up. The sheer volume of lava has produced an unusually large amount of laze, as well as covering distances and acreage much more quickly than any Kilauea eruption in living memory.

Meanwhile, on the HVO website, the USGS has rolled out a new tool showing summit deformation/subsidence as measured by tiltmeters and GPS sensors recently placed around Halema’uma’u (at some risk).

#KilaueaVolcano summit had small explosion at 6:26AM HST. #HVO website has new 1-week #deformation data to help you keep track of these events. Look below tilt plots for real-time GPS on this website: https://t.co/sIPaCMoGbB…#KilaueaErupts #KilaueaEruption #Halemaumau pic.twitter.com/ANKVryinut

Why does the north rim keep jerking back north after each event? Brian Shiro’s term “radial fault” comes to mind. I wonder if the rubble plug is acting like a mini subduction zone, dragging the surrounding rock down with it until the explosion and slippage, allowing the rock around it to spring back up a bit?

Asked whether the explosions are now on a 24 hour cycle, USGS replied: “..ish, yeah. NPIT is on #Halemaumau Crater rim and has dropped nearly 300 ft (90 m) in total since mid-May! UWEV is on northwest caldera rim & moves slowly to south (toward HMM) between explosions then rockets back north as explosions occur. Though UWEV total movement nets to 0.”

ESA gives us a good view of the off-the-charts ground deformation at the summit:

During June 10-16, most #deformation at #Kilauea #Volcano consisted of subsidence of the summit caldera as viewed by the @esa #Sentinel1 satellite. Other parts of the volcano show little to know surface movement. pic.twitter.com/H582rG2Z6y

Some additional details from comments to this photo on Facebook:

“Basically, the radar interferogram is showing subsidence of the summit at very high rates (which we already knew), but no significant deformation elsewhere on the volcano. The satellite data give us a snapshot of ground motion across the entire volcano, rather than the spot checks on deformation that isolated GPS stations give us. This is the advantage of the satellite results (great comprehensive views), whereas the GPS and tilt data give us a better sense of how things change over short time periods (like the sudden slumping that occurs during the ~M5.3 small summit explosions, which happens too quickly to be seen by the satellite datasets).”

“The broader the fringes (deformation), the deeper the source of pressure change. This is an indication that the deeper magma reservoir beneath Kilauea’s south caldera is draining magma to the lower East Rift Zone eruption site. This has been ongoing for a few weeks, and amounts to many tens of centimeters of subsidence. But the shallower magma reservoir, which is located beneath the caldera center and is smaller in volume, was the first to drain and lost more of it’s overall volume, which is why the area around Halema`uma`u is slumping so severely.”

[Below: A look back at May 5 explosive event and earthquake at Jaggar Museum Overlook, back when park still had visitors.]

An earthquake hit again when I was at Halema’uma’u Crater Overlook yesterday, I couldn’t even hold my camera. #earthquake #kilauea #volcano #hawaii #halemaumaucrater

Asked how long it would take to completely empty the magma chamber at the rate fissure 8 is flowing, USGS said: “We’re not exactly sure how much magma is stored beneath the summit — we have only estimates, but we are confident it is at least in excess of 100x what has been erupted so far from Fissure 8. So we would need years of the current eruption rate to empty the summit. The pressure beneath the summit is already quite low, so it’s unlikely that such a scenario could ever come into play — some level of pressure is needed to drive the magma form the summit to the lower East Rift Zone eruption site.”

Nothing new from civil defense today

…the usual alerts. But here’s another vid from their June 15 album, featuring a house whose owner is either very lucky or very unlucky: 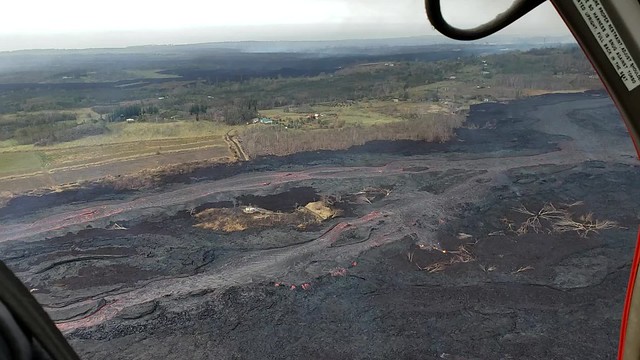 Not live, but videographer Anthony Quintano of Civil Beat was part of the media escorted into Puna and Leilani Estates by the National Guard this weekend, and he came back bearing vids:

Here's a collection of my latest videos from the #KilaueaEruption https://t.co/Pxu3Vsv7Gq #Hawaii #Volcano pic.twitter.com/SBO5YzobdA

It’s Sunday, and the local news is returning to normal local news. Most of the remaining eruption news update pages repost Civil Defense alerts and/or add a few lines to the top of longrunning pages. Eruption news, at least for today, is focused on the people and animals who can’t or haven’t yet returned to normal life:

Watching the eruption from a safe distance.

Keep calm and be a Nene. #halemaumau #crater #kilauea #volcano

On May 3rd, Yvonne and I went to the beautiful Pohoiki to shoot a sunrise, we didn't realize this was the last photos taken before the lava flow covered the lower Puna. At the same day, we saw Pu’u Oo explosion at 10:30am in Kalapana , at 4pm the eruption started in Leilani area.

(Wow. Thanks for another great rec, @Cheaptarts.)

A Moment of Aloha

I can hardly call it “Zen,” but it’s certainly a cool drink of water with everything going on these days: Today’s Dispatches from the Volcano tells us what it’s like to watch and feel the daily explosions, or to be near Pahoehoe. Hawaiian for the day:  “Māwae ʻEwalu” for “Fissure 8.”

Looks like Andrew Richard Hara may have been part of that media group with Anthony Quintano.

20180617 Sanford Quarry – Hawaii Army National Guard . Expansive views of lava channels were observed tonight thanks to Major Hickman convoying us up to a precipice on the southern side of Sanford Quarry. Fissure 8 continued to produce an incredible volume of lava fountaining upwards of 165ft, vigorously traveling through wide, curved, and raised channels from Leilani Estates. Intertwining lava rivers from Fissure 8 streamed east around the north flank of Kapoho Cone with large, active pahoehoe lobes of spillover strewn throughout the channel’s edges. . Mahalo to Major Hickman and his @hawaii_armynationalguard team for making it possible for us for us to safely document this eruption. . All areas that I have documented throughout this eruptive series have been through approved with legal access. Please kokua and do not attempt to trespass in areas unless official approval has been granted. The majority of my efforts are without pay and all expenses are out of pocket. The content shared is being shared without cost to our local news networks for community awareness and support. Some footage does help to pay a very small portion of my expenses. . My respect and best wishes go out to the neighborhood of Leilani Estates, Lanipuna Gardens, and the areas within and between Kapoho. My heart especially goes out to all of my friends who have lost their homes in this fissure eruption. I am at a loss for words. ______ #eruption #bigisland #kapoho #lavaoceanentry #kilauea #eruption #leilani #puuhonuaopuna #nationalguard @hawaiinewsnow

Out at sea with @ikaikamarzo this morning. #kilauea #volcano #puna #hawaii #gbradlewis

And here’s a Flickr photo album with fairly impressive June 16 overflight photos, such as: 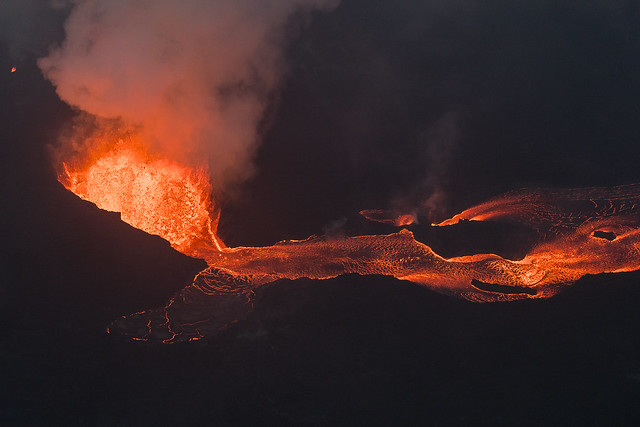 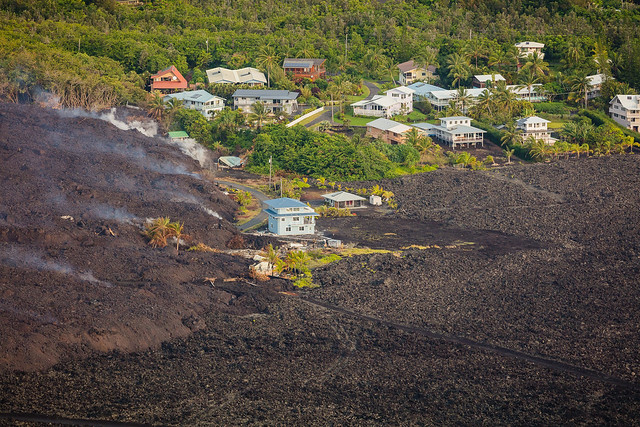 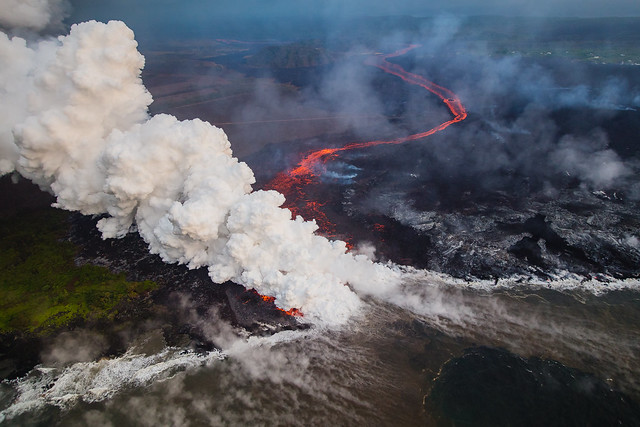 It’s been a rough weekend, so I’m going to cover a little of the lighthearted side to geology.

Vesuvius is getting uppity:

She is still collapsing ! pic.twitter.com/8cjTkg3sNK

So is this an explosive event?

NEW: Agency that monitors earthquakes in Mexico said an “artificial quake” was registered in Mexico City, possibly caused by “massive jumps during the goal from the Mexico national soccer team.”

I think we’re all getting a little tired/unedited.