The LERZ eruption continues with minor variations. This morning’s USGS overflight crew observed that Fissure 8’s fountain and lava level in the upper channel appeared to be slightly lower. However, the lava flow rate down at Kapoho Beach Lots —where there were only a few houses left, as of this morning — seems to have picked up slightly.  Meanwhile, overflows spilling out from the constricted turn around Kapoho Crater have nearly reached Beach Rd about 0.2 miles north of Four Corners. Lava continues to enter the ocean along a very broad front, mostly on the northern side of the delta.

Fissure 22 is “sporadically spattering,” and its flow  may have stalled.

At the summit, today’s collapse/explosion occurred at  1:20 PM HST, registering as a magnitude 5.2. Once again, I noticed rockfalls picking up about a minute before the big shake, although it might be coincidence (they’re happening at other times of the day as well):

The Italian Space Agency has posted a new satellite radar image of Kilauea Caldera, showing the ongoing subsidence across much of the crater floor (you may have to view full-sized version for the animation):

By the way, if anyone else was confused by recent Hawaii Tribune Herald articles that said SO2 levels had climbed tenfold at the summit, I checked with @USGSVolcanoes, who suggested a minor mixup. That increase is occurring down in the Lower East Rift Zone. At the summit, according to Kyle Anderson during today’s media conference call, SO2 levels have dropped to the level they were before the lava lake first appeared.

Channel does look a little lower up near Fissure 8: 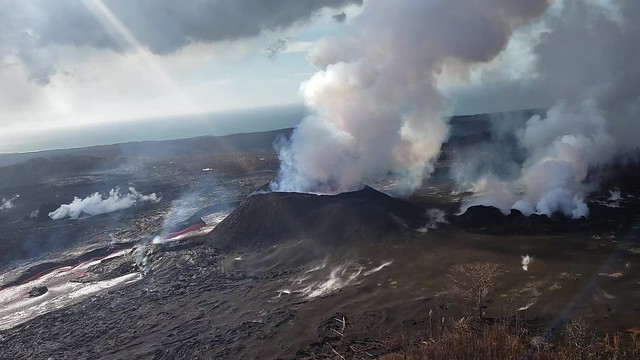 Fissure 22 in the distance:

Flight down river with really interesting view of Kapoho pileup at the end (looks like original channel has a short lava tube at that point, but a lot of lava is b 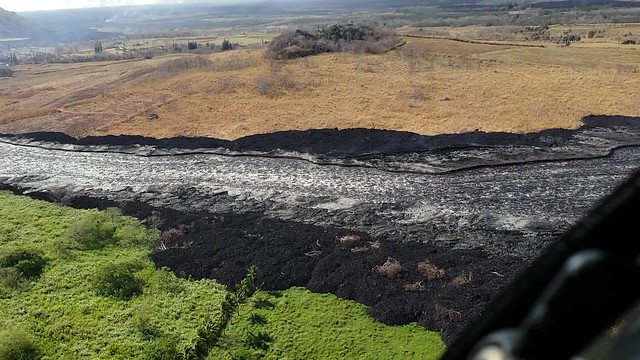 Fissure 22 from south, obscured by its own fumes, but I think the “stalled” lava flow is visible to its right. Also PGV and “lava rooster” house in background:

In the album, looks like they circled around F22 trying to peer at it through its steam and/or checking out PGV, so there’s a lot more photos of both.

Steaming inactive fissures on either side of F8:

Poor Kapoho, the old 1960 lava flow is almost the only thing left (presumably because it was slightly higher ground):

Weird. i think the lighter color is outflow from lava entries.

Here’s audio from this morning’s 11am USGS-media conference call.

Tidbit from that call: the UAVs surveying Kīlauea Caldera are making digital elevation maps that let the USGS measure collapse volumes, but drones can’t fly in windy conditions, and they haven’t been able to do a complete survey since June 21.

Some photos of the hole that appeared this evening on HWY 11 near the golf course. Only one lane is open at this time. Drive carefully! pic.twitter.com/1BeBuBWYpA

This is higher volume than #Kilauea 1955, 1960 and #MaunaLoa 1984. But eruptions from #PuuOo and #MaunaUlu higher in the #ERZ were much more voluminous (and longer lived).

Q: When does lava enter the magma chamber of Kilauea from the hotspot?
USGS: The supply of magma from the hotspot to Kilauea has been nearly constant over the years (there have been some fluctuations, but overall the stream has been steady). The hotspot supplies the magma reservoir beneath the summit, which then feeds eruptions (both at the summit and along the rift zones).

Q: (asking more about how long lava takes to come up from below):
USGS: We don’t have a good feel for how rapidly magma ascends from the melting source (50-80 km down) to the shallow magma system. Some seismic evidence from as far back as the 1950s suggests that it might be months, but it probably varies over time.

Q: With these Magnitude 5 quakes they keep saying “no tsunami hazard” but what if this gets BIG? What’s the plan for the people of the Big Island, and how could impact other volcanoes on the island?

USGS: This thing already is going off big, but we suspect you probably are referring to an explosive eruption from the summit?

The ~M5.3 quakes are associated with collapse events at the summit. The reason you keep hearing about tsunami warnings is because the Pacific Tsunami Warning Center is compelled to issue warnings for anything above M5 in the islands, even though these M5 events clearly have nothing to do with processes that might actually generate a tsunami. We don’t expect significantly larger summit earthquakes at this point — the 5.3 events have been a near daily occurrence since early June. To get stronger, you would have to move more rock along a larger fault zone. This is part of the reason the quakes have been so consistent in magnitude.

There is a small possibility that explosions (larger than we’ve seen already) could occur from the summit, but we expect that to be preceded by a change in activity, which is why we’re monitoring the summit so closely for signs of some new process taking place.

As for how it might affect the rest of the volcanoes on the island, there is no direct connection between adjoining volcanoes (we can see, based on seismicity, that they are independent down to ~50 km depth or so). That doesn’t mean Mauna Loa won’t erupt anyway — it’s a very active volcano that has inflated and experienced earthquake activity in recent years. That’s part of why we’re still monitoring Mauna Loa very closely. Other volcanoes on the island are much older and don’t have any shallow magma storage areas that we know of, so we don’t expect eruptions from Hualalai, Mauna Kea, or Kohala anytime soon.

Q: Could the caldera collapse below the water table and form a lake?
USGS: This is a possibility. It depends on how deep the collapse progresses In some ways, there is a bit of a “competition” between deepening of the crater and filling by rubble. The absolute depth actually hasn’t changed that much in the last couple of weeks, but we’re still awaiting more UAS data for topography estimates before we can do a detailed assessment.
Q: Good that result in explosions?
USGS: Explosive activity when a lake is present is a possibility (and something we’ve highlighted in the past), so it is definitely one of the things we’re watching out for — the depth of the caldera floor is very important in this regard. But for magma to interact with water (which seems to be what has driven some explosions during collapse events at volcanoes in Japan and the Galapagos), that would still seem to require magma ascent. Right now, magma continues to drain from the summit, as indicated by the ongoing deflation.

Q: Could triangulated pulse radio wavelengths be used to measure lava cones, tubes, flows, magma chamber size?
USGS: Good question. We do use radar in several ways — for example, to measure the speed of the lava, and also to measure how the ground is deforming (which helps us get at the dimensions of the magma chamber). It’s one of the more important tools in our volcano monitoring kit!

Q: Any idea how long this is going to last?
USGS: We wish we could say. It turns out that forecasting the end of an eruption is a lot harder than forecasting the start. But given the rate of the eruption and the massive depressurization at the summit, it seems like something that can’t be sustained for that much longer. We expect that the overall eruption duration will be months (we’re at 2 months and counting).

Here’s a look at that overflow developing at the bend around Kapoho Crater yesterday:

–Mick’s Notes for this video

Other Photographers and Social Media

"Honey?!? 🌋Did you notice this new volcano down the street?!?"Before and After the eruption of Fissure 8 in Leilani…

Thursday, July 5, 2018, 5:45 am – Kilauea's east rift zone overflight: A view of Kapoho crater (lower right) and what remains of the farm and beach lots, as the massive flow makes its way to the sea.

Thursday, July 5, 2018, 5:45 am – Kilauea's east rift zone overflight: A view looking west at fissure 8 and its massive plume, with PGV and the perched channel in the foreground.