One gets the sense that crisis mode is giving way to some sort of new normal, as it did during the decades of the Pu’u O’o eruption. Not that one can ever call this normal:

Still, public meetings are no longer dominated by talk about lava, fissures, and SO2 so much as how to collect on insurance and find housing. The USGS has dropped weekend video briefings to give its staff a much-needed break (alerts/info are still posted on the HVO website). Hawaiian news outlets are reverting to a more typical news cycle, with only 1-2 new Kilauea updates a day.

At the summit, steam/ash explosions continue their recent pattern. Today’s explosion registered as M5.2 at 4:48am, shaking the village of Volcano; it was felt as far away as Hilo.  (Local radar is still out, but the ash cloud was small, less than 10,000 feet, since satellites can spot bigger ones).

Halema’uma’u is looking very ragged around the edges:

In the Lower East Rift Zone, Fissure 8’s fountain has tapered off slightly, down to 130-160ft with occasional bursts up to 200ft, but its lava river is still going strong.  As of 6:30am, the new lava delta at Kapoho had grown to 200 acres. An elevated section of the flow near Lava Tree State Park caused some concern this afternoon when it started overflowing its levee, but it settled back into the main channel without a major breakout.

[another amazing Fissure 8 overflight video from Mick; here’s his notes, including rough estimate from USGS: 6-9 million cubic yards per day!]

The Pu’u O’o webcam has even more scunge on it today than yesterday, when there was a few rockfalls and a brief plume of “rock dust.” There were more rockfalls this morning. Earthquake activity under Pu’u O’o is still negligible, however.

I’m running late tonight, so here’s a somewhat abbreviated weekend edition of USGS info, eruption news,  images and videos, including timelapses of the summit and fissure 8 for the past week:

Remember to look for houses in these pictures; it’s easy to lose track of just how enormous Fissure 8 is. Even on a subdued day, its fountain is half the height of the Statue of Liberty:

While lava deltas are usually unstable and tend to wash away, I’m wondering if the shallow waters of Kapoho Bay, the thickness of this flow, and (sadly) the reefs it covered will anchor it better than most.

Below: how’s this for a risky job? “Let’s find unstable places around Halema’uma’u’s rim, and stay there long enough to set up our complicated equipment!”

Hawaii247 takes screengrabs from all of HVO’s webcams, then compiles them into weekly timelapse movies on YouTube. These are from June 1-7.

Notice the intermittently steaming cracks on the ground to the left of Halema’uma’u’s rim.

And here’s the LERZ:

There’s timelapses of four other views of Halema’uma’u posted on their channel, if you’re curious. (I think one is a non-USGS cam, perhaps set up in the town of Volcano?)

No major changes at Fissure 8, channelized flow, or ocean entry. Summit seismicity building, and a small explosion is expected during the day on June 10. pic.twitter.com/H3ZMIlcqV5

USGS may have cut back on weekend video briefings and conference calls, but their social media team is still putting in long hours to answer questions.

We won't be able to inspect the delta at all until flows stop going into that area. Though, based upon past ocean entry and bay filling in Kalpana, this one may turn out to be much like Kaimū beach.

That is the cone that has been forming around fissure 8. It is well on its way to becoming a new cinder cone. #Kilaeua #KilaueaErupts #LeilaniEstates

That answers my question about whether to call it s a cinder cone or spatter cone. It’s not a new volcano,  by the way. It’s just a new vent on Kilauea volcano like Pu’u O’o, Mauna Ulu and Kilauea Iki, all of which were supplied by magma from Kilauea’s plumbing.

The length of this flow is pretty amazing.

Our geospatial team measures about 13 km or 8 miles from fissure 8 source to the ocean entry. That's a long river of lava!

I wonder how wide it is? It varies, obviously, but it looks enormous in overflights.

Different view. The KIcam has a wider angle view than the lifestream. But, yes…part of the northern rim slumped a bit today. #Halemaumau is still growing!

It’s odd how, when Kilauea lets loose with an unusually big and spectacular eruption, some non-geologists start claiming that something much, much bigger is about to happen, almost as if they’re not satisfied with the drama so far:

While #Halemaumau Crater is collapsing, the entire #Kilauea Caldera is NOT collapsing – it is subsiding (lowering). There is a big difference between that and a catastrophic collapse. #Kilauea does not have Pinatubo-style caldera collapse eruptions. #KilaueaErupts

Anthony Quintano can sympathize: the moment you put up a livestream, people start asking you to adjust the camera.

Unfortunately we don't have a vantage point that can show the entire crater now – it's gotten that big.

Hydrofracturing did not cause the eruption. #Kilauea is an active volcano and has had many cycles of fissuring and explosive activity, (https://t.co/lfmS4Xz4Bs), none of which were caused by humans.

[rant]A moment’s thought would debunk this hoax, since there are old lava flows, spatter cones, not to mention films and pictures of  similar eruptions in Puna decades before the plant was built. Pu’u O’o erupted for 35 years before lava output shifted downrift to Leilani Estates. Even then, no fissures opened near the wells; the lava that covered them came from outside PGV property.

Most of all, I wish people would stop misusing the word “fracking” for any sort of hole in the ground. It’s a new word coined to describe a new process for oil extraction, which deliberately cracks and weakens rock in a wide area. Wells don’t work like that. If they did, there would’ve been no need to invent fracking![/rant]

And no, it wasn’t our imaginations…

Yes, there was an earthquake yesterday that caused a series of rockfalls into #PuuOo. The red/pink plume is from oxidized (rusted) rock in the walls of the crater.

This is from the Hawaii County Fire Dept a few days ago. Sped up, one really has a sense of the entire flow from source to sea: 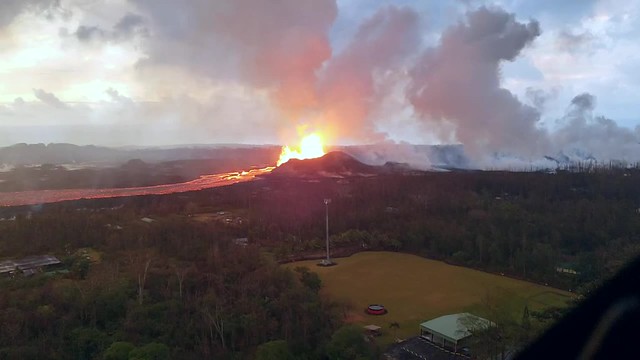 From Other Geologists (or at least scientists)

This afternoon, the built-up lava channel started overflowing near the intersection of Highway 132 & Pohoiki, triggering warnings for residents in that area and Lava Tree State Park, but it settled back into the main channel without a major outbreak.

What a wild 6 weeks its been. And an unknown number ahead for #KilaueaEruption on #Hawaii: pic.twitter.com/kiXE3X1tt0

Andrew Richard Hara posted another handful of good photos from a helicopter overflight. Here’s the first of the batch:

20180608 @ 12:30 – 13:30 HST Eruption Overflight . Wide, raised lava rivers peppered with islands of kipuka continue to meander throughout Leilani Estates to Kapoho. Fissure 8 continues to feed a growing delta out into Kapoho shorelines through massive channels of lava continuing to converge and diverge downhill toward Kapoho. Many streets have become unrecognizable due to the output of eruptive volume throughout these five weeks of activity. . All areas that I have documented throughout this eruptive series have been through approved with legal access. Please kokua and do not attempt to trespass in areas unless official approval has been granted. The majority of my efforts are without pay and all expenses are out of pocket. The content shared is being shared without cost to our local news networks for community awareness and support. Some footage does help to pay a very small portion of my expenses. . My respect and best wishes go out to the neighborhood of Leilani Estates, Lanipuna Gardens, and the areas within and between Kapoho. My heart especially goes out to all of my friends who have lost their homes in this fissure eruption. I am at a loss for words. _____ #leilaniestates #eruption #bigisland #helicopter #hawaii #aerial #volcano #lanipunagardens @hawaiitribuneherald @hawaiinewsnow @natgeo

Nice stuff! 🙂 Interestingly, it's not really clear how long it'd take for a magma reservoir to go from a state of quiescence to primed to erupt. That cited paper suggests a year/few months (for one particular chamber), but another says 10k years minimum. So 🤷‍♂️basically!

Picture shared by @USGSVolcanoes of inside closed @Volcanoes_NPS on right looks a little like shot of Mars surface from @NASA's Pathfinder, left. #Mars#KilaueaEruption #rockExplosion#ash pic.twitter.com/CeGuWmGHzU

Interesting to see some freshly-covered-by-lava lots come online in realty listings on #Hawaii's Big Island, most with disclaimer, "Buyer & Agent to investigate all pertinent & material facts and not solely rely on information supplied by the Listing Agent and of Listing Office." pic.twitter.com/oo7S0l7rTW

Apparently a lot of us have noticed and are thinking it:

Imagine the explosion when that big chunk on the left falls in.

And we’re all hoping it happens during daylight so the livestream cam can catch it, right?

A reminder to thank and/or appreciate the USGS team for hard work and over a month of sleepless nights:

@USGSVolcanoes Y'all continue to do an amazing job with social media (and everything else). Please pass on deepest gratitude to all of the USGS/HVO scientists and staff and all of their families. Mahalo nui loa.