Kilauea’s double eruption continues with little change, except for a few more spillovers. Fissure 8 is feeding its lava river, which continues to ooze out along a broad front on the northern side of the delta and into Kapoho Beach Lots. Fissure 22 continues to spatter intermittently and send out a less-than-impressive flow.

About a dozen Kapoho homes have succumbed to lava over the past week, and more are expected to go. The National Weather Service also reports that there were about 1,200 lightning strikes between 7am and 2pm yesterday during Monday’s lava-boosted thunderstorm in Lower Puna.

Today’s summit explosion occurred at 2:17am HST, with enough clouds that radar couldn’t find a plume (if any). Just to prove seismometers aren’t stuck, the magnitude registered as 5.1. Seismicity is back up to 20-30 quakes per hour after the lull.

Not to be superstitious or anything,  but geologists need to stop giving Pele ideas. During yesterday’s media conference call, Mike Zoellner said, “They [lava boats] do present a risk, because if the flow of the channel jams them against the side and it contacts the levee, that disrupts the flow of the channel. It could divert either the flow itself or the lava going around the boat out of the channel.”

See below for a few more photos of this from the Hawai’i County Fire Department.

Subsidence at the Summit

Somehow I missed this incredible animation of the crater’s subsidence last week. If you get a magnifying glass icon while viewing the full-sized version, be sure to click it.

From Other Official AGENCIES

Psst. NASA. They’re “fissures” not “rifts.” But thanks.

Civil Defense posted a photo album from HC Fire Dept’s morning overflight today, 160 photos, 10 videos. Here’s a few, including a closeup view of the surface of Kapoho Bay as it looks now. Warning: one burning house. 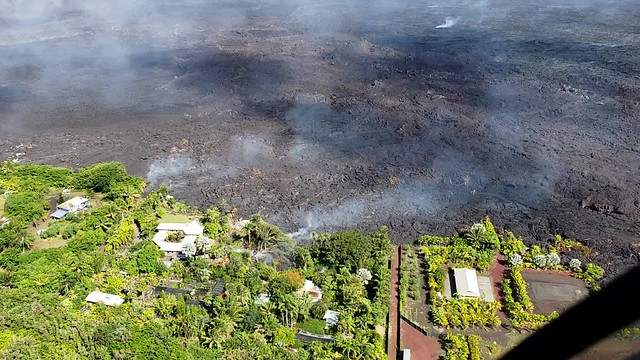 Here’s some of the spillovers from that blockage the USGS documented:

Every once in a while I remember those are not small trees on either side of the river:

A few houses for perspective:

A view one doesn’t often see, looking northeast along the fissure system. Sulfur around the fissures in the foreground, and I believe Fissure 22 is the fuming black cone that sticks up highest in the distance.

Clogged arteries are no fun (I think the “rafted material” is that lumpy dark stuff to the left of the orange lava):

(See the full album for more images of this, the lava delta, and other key features of the Rift Zone— although I notice nobody’s flying over the lava river and into the SO2 side of Lower Puna to get a good view of Fissure 22.)

#PTWC has created a new animation focusing on the seismic activity at the summit of #Kilauea #Volcano, both #earthquakes and #explosions, from April 1 through June 30, 2018.https://t.co/v1VpvPckyl

Q: How high above pre-eruption ground is bottom of channel?
USGS: We can’t know for sure what that measurement is. But we do know that the top of the channel margins is over 20 m (65 ft) in many locations – especially near vent.

Q: How many cubic miles has F8 erupted?
USGS: Doesn’t seem like much when you convert it to miles – about 0.1 cubic miles (or 450 million cubic meters).

USGS: Those are overflows that we have been monitoring from the air. It’s been happening a bit lately, but we haven’t observed any major breaches.

Q: The last few days it seems like more earthquakes in Pahala and pretty good ones. [There’s been a cluster of small eqs there on the monitoring map for a while] I live in Naalehu and my windows have rattled a few times. Any word on this? Just curious any way to tell if magma is moving south? Or south west?
USGS: There has been an uptick in Pahala-area seismicity of late — see the attached plot of numbers of earthquakes in the area over time.

Many are quite deep, and might reflect the mantle magmatic system of Kilauea. The shallower ones (which are the ones you are probably feeling) are more ambiguous. We’ve seen shallow seismicity in that area before that we believe might reflect fault zones that respond to changes at Kilauea or Mauna Loa, so it is possible the the massive summit deflation is putting stress on those faults. We don’t see evidence for magma moving down from the summit to the southwest. In addition to earthquakes, that would be accompanied by deformation, and we don’t see any significant ground motion in the southwest rift zone.

Q: In what ways is the Kīlauea summit collapse similar to that of Piton de Las Fournaise in was it 2007? And different?
USGS: Interesting question. First of all, it is much lager than that of Piton de la Fourniase, and also much longer lived (that collapse occurred over just a few days). But in a general sense, there are similarities — both events occurred incrementally (as opposed to a sudden drop), and both were initiated by large-volume outpourings of lava on the flank. So in some ways, one could think of Kilauea and PdF collapses being reasonable analogs for one another, just at different scales.

Q: What might happen when lava refills the [summit] crater? It will return, right?
USGS: Yes. It will eventually return. It has repeatedly in historic time after periods of collapse around Halema’uma’u. it may refill the crater, but that all depends upon whether magma is being injected into or erupted from other areas along the volcano’s rift zones. In the 1800’s the caldera had a much more broad and deep area than we see now. There were even multiple small lava lakes that filled in portions of the caldera as they overflowed.Q: Will there be an explosion when the lava comes back up through the debris?
USGS: That’s a good question. Historically, the magma has risen passively to consume the debris in the vent. But there could be steam explosions if water begins to leak into the caldera, and magma interacts with that water. We’ll be continuing to watch the conditions in the caldera very closely once the current activity subsides.

First time I’ve remembered to watch this in fullscreen mode for a while. Wow. I’m amazed they were able to fly at all, with yesterday’s stormy weather.

Other Photographers and Social Media

From the summit of Mauna Kea:

Footage from our new "lava cam" at the summit. You can watch the lave at night along with the clouds at the summit. https://t.co/JiFiibOlZL pic.twitter.com/ZkpB9A0xOH

The next two are from a 31-image photo album by Chris Paduan who hit both the lava boat tour and Paradise Helicopters within the past few days: 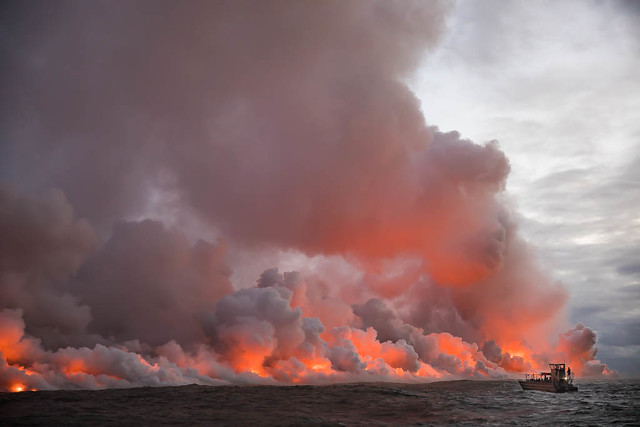 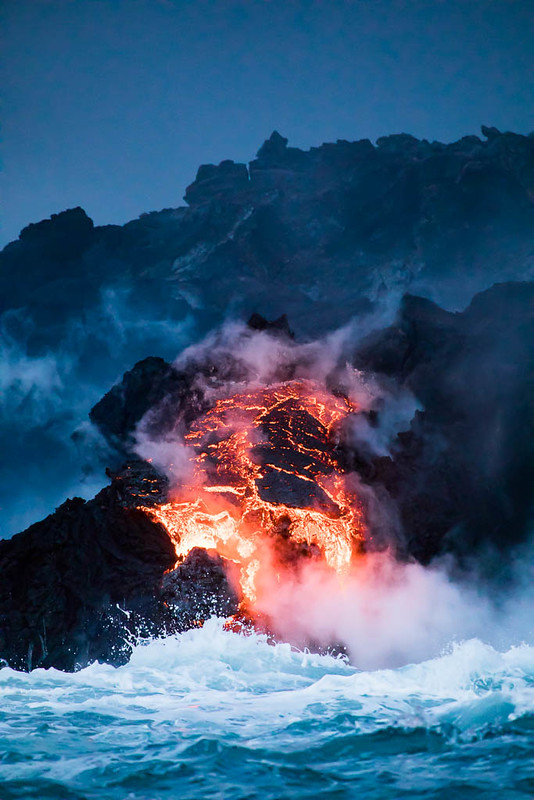 National Guard Public Affairs Specialist Santiago was testing the SO2 level at Leilani Estate during the media escort mission, thank you for keeping everyone safe from the hazards of the eruption.

Coqui frogs. I know they’re pests, but I love that sound:

Fissure #8 behind the volcanic gas and steam last night after the thunderstorm. (The loud noise from coqui frogs are everywhere) #kilauea #volcano #eruption #fissure8 #Leilani #Hawaii

A little sad seeing all the plants around the LERZ webcam turn brown:

The most dramatic image of the day on the @USGSVolcanoes Lower East Rift Zone Kilauea camera is often taken as the sun is setting. pic.twitter.com/UWkW53TcaC

The glow of the Halemaumau lava lake may never be seen again. It drained two months ago and is now collapsing into the emptying magma chamber below, causing hundreds of earthquakes a day. This is just another chapter in the book of Kilauea Volcano. As with the lower east rift zone eruption in Leilani Estates, this is simply where the action is now. One day it will stop, then start somewhere else. With 90% of Kilauea being covered every thousand years, it’s non-stop action on the worlds most active volcano. Stay tuned! #kilauea #volcano #hawaii #gbradlewis #aloha #halemaumau #milkyway