The Lower East Rift Zone eruption continues pretty much as usual: Fissure 8 feeding a lava river with occasional short-lived overflows. The main lava channel no longer reaches the ocean, but crusts over a half mile from shore and dives into the lava delta, oozing out at multiple points on the northern side. One especially large “ooze-out” makes a short flow on the north side of the flow field near the last few Kapoho Beach Lot Houses, a few of which are hanging on. Fissure 22 is weakly spattering with a weak flow to its east. Today’s summit explosion occurred at 6:04pm, equivalent of M5.3. Thick fog obscured the livestream view.

So that’s all routine, if a volcanic eruption can ever be routine. The big news today actually took place last night (see what happens when I finish my posts early?):

Preceding this meeting was a long-expected document from USGS: Volcanic Hazard at the Summit of Kīlauea Update. While the Kīlauea Summit Earthquakes FAQ explained what is happening, this new update to a May 8th report summarizes what the USGS thinks might happen at the summit before this sequence is over, based on the volcano’s distant past.

During the Q&A session, a resident asked about the odds for the worst-case scenario, a large-scale caldera collapse with explosive activity. Harry Kim took the mike from Tina Neal and said, “Like you, we always like to know percentage odds. And she knows; I asked her that. And I’d like to answer because she said, ‘One percent.'” [Tina went on to explain how they arrive at such probabilities; she wasn’t being flippant.]

Another reassuring quote from the Q&A session:

Don Swanson: “I think that the evidence we have today looks to me as if [the subsidence/collapse] is going to be confined to within the caldera, because the outermost circumferential fractures that have been occurring on the caldera floor have not extended outward in the last 2-3 weeks or so. So to me, that suggests that they may be defining the outermost limit of potential caldera collapse.”

The reason for telling people about the remote possibility of catastrophic caldera collapse is that if it does happen, people need to be prepared to evacuate and not think they can “sit it out”.  While Kilauea’s largest explosive events in its past history have a range of only a few miles, Volcano Village is within the hazard zone of “worst case scenario” eruptions.

(The reason Kilauea’s biggest explosions are small potatoes compared to Krakatoa and St. Helens is that its lava has much less silica content, so it can’t hold in as much pressure as they can. They’re pressure cookers; it’s more like a pot with aluminum foil over the top.)

Now back to the here & now.

Previous holes and sizable cracks have occurred on Highway 11 near this location during prior eruptive and seismic events including a magnitude 7.4 earthquake in 1975 and the onset of the Puʻu ʻŌʻō eruption in 1983. 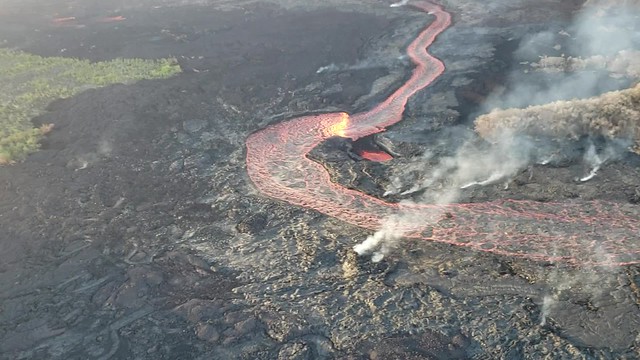 I think I may see a source for at least some of the lava boats— look at the inside lip of the cone: 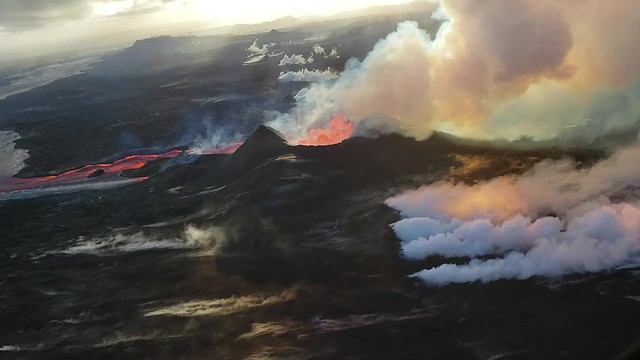 Fissure 22 fuming in the distance behind PGV: 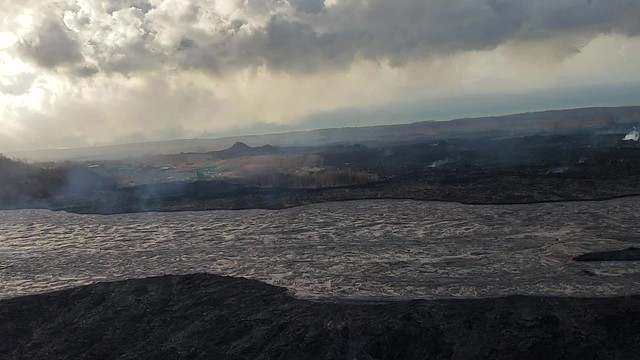 According to his notes, that mess by Kapoho Crater is apparently what sent that flow over the surface of part of the delta on the north side towards Kapoho Beach Lots.

Q: Any info on what’s happening with the damage to Hwy 11 by mile marker 30?
USGS: It appears that an old lava tube has collapsed and taken part of the road with it. The spot had already been patched multiple times, and a former HVO employee says that that same hole opened during the 1975 earthquake and at the start of the Pu`u `O`o eruption in 1983.

Some photos of the hole that appeared this evening on HWY 11 near the golf course. Only one lane is open at this time. Drive carefully! pic.twitter.com/1BeBuBWYpA

Q: Tina Neal mentioned an “ash hurricane.” Where did that term come from?
USGS: “That’s a very informal term. She was talking about a pyroclastic flow or surge, which is a flow of hot ash and gas that can move with incredible speed along the ground. Colloquially, some people refer to it as an ash hurricane, but that’s really just meant to help visualize the speed.”

Q: Did today’s overflight show any more lowering of lava levels in cone, perched pond, channel?
USGS: No, there was no appreciable change in the activity at the cone. Fountaining is still very low and confined within the cone, but vigorous and feeding the channelized flow at about the same rate as yesterday.

Q: Yesterday’s update said fountain height lower, upper channel not as full. How about today?
USGS: It is similarly low today, although still zipping right out of Fissure 8 at 30 km/hr.

Q: Latest estimates on lava flow speed/volume at standing wave area?
USGS: The average velocity near fissure 8 is 5 m/s with a max of 9 m/s, and the flux is around 100 m3/s at that vent.

Q: [Rude person daring HVO scientists to spend the night at the summit, as if this will somehow validate their analysis.]
USGS: Many of the HVO scientists are, in fact, still at their homes at the summit. Those who are not were living inside the Park, and because it is closed, they were forced to leave their homes.

from other Photographers & Social Media

After only 2 months, Kilauea has re-shaped much of the area around Pahoa, Hawaii (including @joe_mascaro’s field sites) https://t.co/NkoDIq0dFl cc @USGSVolcanoes @Volcanoes_NPS @planetlabs @eruptionsblog

Puna. 2018. Feels like a dream. When do we wake up, and head down for a surf session or a swim? The only constant now is change. I guess it’s always been that way. Touch stone. Knock on wood. Good luck to us all. Aloha. #leilani #puna #kilauea #volcano #hawaii #gbradlewis

Looking back on the destruction of past eruptions:

I have seen many chapters unfold in the book of Kilauea Volcano. As I write this, lava is consuming some of the last homes remaining in Kapoho Bay, which is hard to fathom. I took this photo on June 23, 1989 when a lava flows burned down the Wahaula Visitor Center in Hawaii Volcanoes National Park. I have to keep reminding myself that Kilauea is just being its authentic self, and we humans have taken up residency upon her flanks, so I don’t take it personally. Living on the worlds most active volcano…. #wahaula #hawaiivolcanoesnationalpark #hawaii #gbradlewis #kilauea #volcano

Massive river of lava!Fissure 8 is the source and can be seen in the upper left. Facing west, what you see is about…

It always gives some perspective to have a lava boat in a photo for scale. Sunrise scene in Kapoho of “The Hot Spot” of …

Posted by Db Photo at Primary Focus on Wednesday, July 4, 2018

PRINTS AVAILABLE IN PROFILE LINK 🤙🏼 . Photographs in this collection were captured at the first appearance of Fissure 1, which began on May 5, 2018, in Leilani Estates. These historic visual documents of the eruption on Hawaii Island span the course of eight weeks in the areas of and around Leilani Estates, Lanipuna Gardens, and Kapoho in chronological order. The fissure eruption has caused many to feel mixed emotions of awe and tragedy. Rapid currents of lava continue to change more than 11 square miles of our island landscape. More than 660 homes have been destroyed, displacing thousands of residents while pets and wild animals continue to be rescued from many isolated areas. While many now are out of immediate danger, lava continues to rapidly flow from Leilani Estates to Kapoho with no significant signs of change. . Proceeds from print sales will be donated to Pu’uhonua o Puna and Hawaii Community Foundation through Lyman Museum. A portion of proceeds will also help to recover eruption documentation expenses. These photographs were created to not only help our local community awareness but to also provide accurate and respectful information to mitigate inaccurate and sensationalized news coverage to stabilize our tourism economy. . Mahalo to businesses, organizations, and individuals supporting eruption evacuees and ohana who can no longer return home. While massive destruction has impacted many of us, the creation of friendships, partnerships, and community bonds shine brightly in the midst of disaster. It is inspiring to meet so many people who continue to make life safer and more comfortable for others. Special thanks to incredible friends, businesses, and government agencies who allowed or helped to acquire legal access to help document the eruption and last remaining tides of our neighborhoods. . My respect and best wishes go out to all who have been impacted by the eruption experience. There are no words to describe the amount of loss, personal tragedy, and stress our community has been experienced. . Mahalo nui loa, Andrew Richard Hara . #leilani #lava #bigisland #fissure #eruption #volcano #hawaii #kilauea #kapoho #emergencyfund @hawaiinewsnow