I think I missed yesterday’s thermal map, which illustrates how the lava channel crusts over as it reaches the earlier flows of the lava delta and fans out beneath the surface:

Total lava coverage for this eruption has reached 10 square miles, including about 520 acres of new land.

According to a Hawaii News Now article, on Friday Fissure 8 was measured at approximately 34,000 gallons/second.

Mick Kalber’s June 29 video (posted this morning) mentions “several more homes” destroyed. His June 30 video description says he observed one more home destroyed today, “bring[ing] the total lost in the area to a half dozen over the past several days. She is now still advancing towards the Alahanui Hot Pond and Kua O Ka La Charter School.” Here’s his overflight video today:

Local news outlets don’t have much to say on Kilauea this weekend, after their very busy Thursday up at the summit. A few odds and ends:

Looking down into the maw:

This makes sense of the rubble-choked chimney below the main crater:

An unusual view of Fissure 8 and the inactive fissures still steaming away:

Upwelling over a toe of lava moving underwater:

And here’s where it’s oozing on the southern edge of the lava field (note position of channel; ocean is out of sight on the right):

Back up the channel close to Fissure 8, looking west towards Kapoho Crater and the ocean entry area (minor spillover in foreground; another view shows it was active today):

And a quick pan of the main channel, scanning from Puna Geothermal Venture down to the coast: 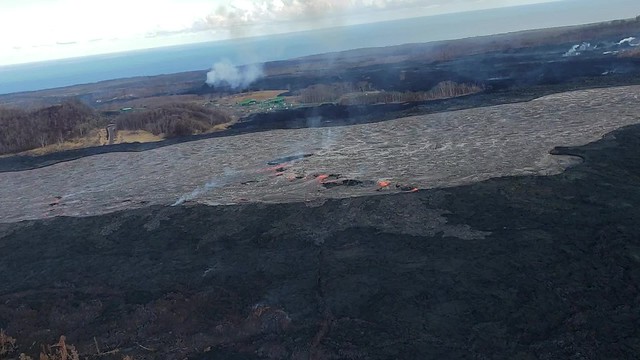 As usual, it was hard to pick and choose, but those are fairly representative of today’s album of 155 photos (!!)  and a couple videos.

From yesterday’s album, you can see exactly where the lava channel crusts over after rounding Kapoho Crater (and the graveyard of Green Lake):

Yesterday’s album [97 photos, 1 video] concentrates on the beleaguered homes of Kapoho Beach Lots and views of the last half mile of the lava flow where it’s crusted over and oozing out the sides in a few spots.

Thursday’s photo album [156 photos] makes a detailed checkup on some Kapoho properties, as well as on the whole lava river (especially the dramatically wide “ponded” area just west of Fissure 8 where it spreads out), with a swing past the ocean entry and some untouched areas just south of it.

USGS Q & A On Social Media

[Comment on yesterday’s drone video of Fissure 8 and lava channel] What’s causing Fissure 8 to pour out lava so fast? That’s a lot of energy being released!
USGS: Yes, there is a lot of energy being released! Magma is being pushed out both by the pressure of other magma farther up the Rift Zone, and by gases in the magma itself (a lot of which are coming out at fissure 8).

Q: This year’s fissures are parallel but west of the 1955 fissure zone. Does that indicate fracturing and a large slump on the way?
USGS: Not really. The East Rift Zone is quite a wide feature, and vents can be spread out over a width of 1-2 km. And actually the 1955 vents are both east and west of the current activity. The 2018 fissures fill something of a “gap” in the 1955 vent areas.

Q: [Resident of Kapoho] I’ve noticed lava output increases around the full moon.  Has there been any research on this?
USGS: We actually haven’t noticed any impacts related to lunar tides (in fact, right now the lava channel is lower than usual). There has been a lot of research on this possibility, and there is a suggestion that if a volcano is on the verge of erupting, or some process is teetering on the edge of happening, that a tidal maximum might push it over the edge, but tides don’t appear to exert a primary control on eruptive activity, surprisingly enough.

Q: What made the ocean entry switch from the south to the north side of the lava delta? Did something block it?
USGS: Ocean entries are weird that way — they can meander back and forth across a broad front depending on a variety of factors. The flow in that area is quite spread out, and there are various crusted-over pathways underneath the existing lava that molten material can take to get to the ocean. It’s an incredibly dynamic process.

Q: It looks like it’s added about half a mile of coastline out to sea?
USGS: That’s about right, measured from where Kapoho Bay used to be.

Q: Are there new quakes along the Hilina Fault system?
USGS: The earthquake activity on the Hilina system has been pretty normal of late. We haven’t noticed any significant changes in the aftermath of the May 4 M6.9 earthquake.

Q: What happened to all the talk about steam explosions if the lava level dropped below the water table?
USGS: The lava level has dropped well below the level of the water table — that happened by mid-May, and we think was partly what enabled some of the steam and ash explosions that were especially noticeable during the second half of May. Now, those explosions are much reduced in vigor and have been replaced by downdropping of the caldera floor, both continuously and in discrete events (the M5 “collapse” events).

Q: Looking at the deformation data on the HVO website, the CALS sensor has dropped TWENTY meters in the last six days! Is it on the caldera floor, or up on the shelf at Keanakako’i Crater?
USGS: Impressive, isn’t it? The CALS station is on the caldera floor below the Keanakakoi overlook area. It’s within the area that is downdropping (obviously), as there is a new scarp between the station and the overlook.

Q: Is the crater going to expand closer to HVO/Jaggar Museum?
USGS: Thus far, the collapsing area is contained within the inner part of the caldera. The area of the caldera along the northern and eastern edges seems relatively stable (although still sinking), and the major caldera bounding faults aren’t moving significantly, but we are concerned that the deepening of the crater near the museum might undermine the caldera walls. We’re keeping a close eye on that.

Q: Are the intervals between collapse events increasing?
USGS: Not really. It might seem like it, but the collapse events have been separated by anything from 8 to 64 hours. So this interval is pretty normal (whatever that means these days).
Helen Garlin on Facebook: How do these collapse events compare to the earlier events that generated much higher plumes of steam and ash? I am thinking that the earlier events were explosions with built-up steam propelling outward, and the more recent and ongoing events are more similar to implosions with the matter ejected more dependent on atmospheric conditions for height of plume.
USGS: Good insights. The earlier events occurred when there was more of an open vent through which steam and ash could be emitted, and also before there was significant downdropping of the caldera. These latest events, since early June, have been more associated with major drops of the caldera than they have with steam and ash emissions, and they have a seismic signature that resembles a mine collapse, and the steam/ash emission has been minor (perhaps more related to rockfall dust). So there has been a change in the character of the events over time.

The sheer scale of the eruption in Hawaii is off the charts. I posted a video yesterday of an accretionary boulder floating down a lava river. Observers next to this boulder, at the end of the video, gave a true scale to the scene. So what could have been the size of a toaster ends up being the size of a London bus. In this photo, the albizia trees silhouetted in the foreground are well over 100 feet tall. The fissure behind them is over a mile away, from where I was recording this event with a 500mm lens on a Nikon D850. Each explosion of lava created sound waves that vibrated through my body. This is just one of the seven exploding fissures that was going on at once during this night. I was an invited guest on a property in Leilani estates when I captured this image. I stayed there for three days and nights in utter awe. #leilani #puna #kilauea #volcano #hawaii #ʻAilāʻau #gbradlewis #aloha

This is what it's like to stand only a few hundred yards away from fissure 8 inside #LeilaniEstates. The cinder cone surrounding the fissure is roughly 180 feet high. Video by @anthonyquintano #KilaueaVolcano #Hawaii pic.twitter.com/jNFSfS6UlM

Lava from Kilauea volcano sets the night on fire. I have a lot of respect for this terrifying beauty. #Kilauea #volcano #hawaii #lava #bigisland #nofilter pic.twitter.com/h12JdB82Pc

The night before the Blessing of Sacred Heart Shelter, the temporary micro-housing units for lava evacuees at Pahoa. The backdrop is the plume from fissure 8. #Pahoa #Hawaii #shelter #punastrong

Based on photos last week, I think this is Fissure 22 from above: