Today’s summit collapse event at 6:41 am was a 5.3, as usual. The USGS apologized for calculations errors for the past 3 days

Since I was out and missed it on livestream, I’m very glad HVO captured it.  Here’s yet another trick from Pele’s repertoire:

There’s a lot to look at here. From USGS caption:

“In this video, watch as today’s event unfolds from the perspective of HVO’s live-stream camera. At 6:41:08 (time stamp at upper left), a small tree along the right margin of the video begins to sway. At 6:41:10, a pressure wave passes through the steam plume in the crater, and light is reflected back to the camera (highlights the passage of the expanding sound energy through the air.) At 6:41:11, a rockfall begins on the South Sulphur Banks, a distant light-colored scarp on the left.”

I notice the latest HVO Kilauea report says Fissure 8’s cone is down to 50 m, “or 55 yards.” It’s definitely crumbled or eroded— that may be responsible for some of the lava boats— but I’m never sure whether they’re measuring from the original ground level or the lava on which it sits. At any rate, the fountaining is lower, too, since it’s not rising above the lip of the cone.

Down at the ocean entry, the main channel is still dumping into the sea from multiple toes near former Ahalanui.

I’m impressed HCFD was able to catch a glimpse under the thick, low laze plume, which was obstructing the view during @HotSeatHawaii’s overflight, which looked about like this (in fact the USGS helicopter was down below them):

“Ooze-outs” are occurring along the west side of the active flow south Kapoho Crater, all the way down to the ocean (where it is threatening Isaac Hale).

Other news that slipped under the radar: HCFD took a swing by the summit yesterday! It was very dusty and hazy, but the new shape of Halemaʻumaʻu is becoming clear: 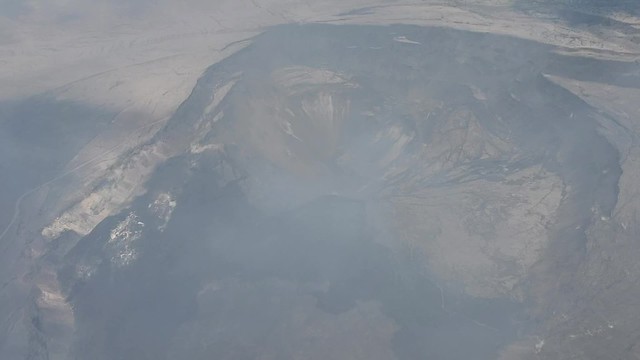 Look for Crater Rim Drive at lower left around 0:30, falling into the crater where it used to lead to the parking lot; HVO is really hard to glimpse at upper right.

There were several more photos, giving us a little more perspective on the whole of Kīlauea Caldera as it is now:

HVO on the right side of this picture,as well as the parking lot for Kīlauea Overlook, the light patch on the top of the cliffs in the right foreground:

The rest of the album is a Fissure 8 and ocean entry overflight from yesterday, July 23. 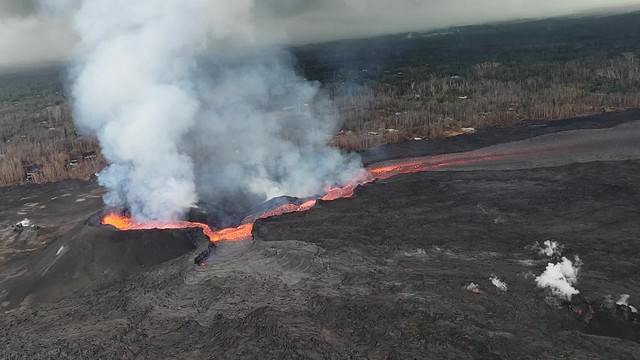 Great thread on South Sulphur Banks that  are being unearthed by current eruption, buried since the end of the 19th century:

The South Sulfur Bank is located along the southern edge of Kilauea Caldera (white circle in map). When Western naturalists first described the region in the early 1820s, it was a scarp over 100 meters tall. Eruptions in the 19th and 20th century slowly buried it. pic.twitter.com/ECtfjFovjp

Pele has more stamina than we do

This Thursday will be the last USGS media conference call (mea culpa, I need to transcribe Monday’s).

And I’m afraid I may be switching to weekly digests plus posts for interesting individual events starting Thursday, which will be 3 months since the first fissure started erupting.

But this historic eruption is still revealing new surprises every day, and even the things that are no longer a surprise— Fissure 8 pouring out its lava river day after day, periodic 5.3 summit collapses— are astonishing.

It’s also astonishing that a “mere” rockfall of this size can seem almost routine at this point:

Oh good. I was watching @hotseathawaii livestream this morning, and there were some especially impressive breakouts pouring into the ocean this morning.

And one great shot from this flight by Bruce Omori (more below):

Followup on yesterday’s before-and-after digital elevation maps by OpenTopography (USGS retweeted both of these):

Topographic profile, from west to east, through the center of the Halemaʻumaʻu Crater comparing the 2009 data (light gray) and July, 2018 data (dark gray) datasets. pic.twitter.com/lMtfw4z6WW

Q: [Why do you now think May explosions were caused by gases from magma instead of groundwater-hot rock interactions?]

USGS: Mostly because of the presence of juvenile (new) material in the ash we’ve sampled. If there had only been overheated groundwater causing the explosions, we probably wouldn’t have seen that juvenile component. That’s science for you – we update our models as we gather new data!

Q: [Complicated questions about gases, expanding circumferences of collapses  having an effect on Fissure 8 surges.]

USGS: We are still investigating the dynamics of the connection between surges at fissure 8 and the collapse events. Sometimes the outflow of lava does include more gas and appears frothy vs. relatively outgassed and more passively flowing. These visual observations correspond to amount of visual gas in the plume above the fissure as well. However, there is still a need to quantify these observations to determine if pulses or gas-rich events at the vent correspond to increased flow and therefore greater potential for overflow hazards down-channel.

USGS: We also had helicopter flights report a plume a few days ago. Thank you for your observation!

USGS: Initially, earthquake magnitudes are automatically reported by software. Our seismologists revise and update them afterward as more data become available and more analyses are made of the event. See “Why/When does the USGS update the magnitude of an earthquake?”

USGS: The collapsing material in #Halemaumau crater, which is mainly rock debris from the crater walls, doesn’t feed directly into the East Rift Zone – it’s the pressure increase from the collapses that propagate down to the Lower ERZ and causes the post-collapse lava surges.

Absolutely. Here is our graphic of the collapse process. It doesn't show the conduit, but the second graphic does. You can find a detailed description of what we think is going on at https://t.co/c9476EMuAe pic.twitter.com/2Dyn6o4U2S

Q: What’s the legend for the second graphic?

Q (John Calvert): How will magma stop feeding into the #LERZ conduit? I see the piston moves down due to subsiding lava, meaning draining to the ocean. Does this go on until the level in “SC” on your graphic is below “K”? Or does deep upwelling refill “SC”? Months to years? Mahalo.

USGS: Deep upwelling refills the south caldera (SC) source, yes. However, SC isn’t largely involved in the supply to the ERZ. If the SC source were to be emptying faster than it’s filling we’d see an obvious deformation signal. Magma is flowing from H through K and out to LERZ.

USGS: The arrow is a general reference interpreted from the thermal map. There is no “edge” of a lava flow in that location, it’s simply where the signature of the molten lava becomes too diffuse in the thermal map to mark it as a distinct channel.

[Posts like this make up for trolls and bots— it turned out someone on Twitter first spotted the shock wave!]

Best thing I could think of involves a pressure wave passing through the steam and changing the alignment–and therefore, reflectivity/refractivity–of the molecules. Would also explain the sudden dissipation of the steam cloud promptly thereafter.

Starting off my Birthday with some lava and a beautiful sunrise! Pohoiki is under attack however, Shacks is gone, lava encroached Dead Trees, But the boat ramp and red house still stand as of 7/24/18 6:00am . . #leilanieruption #lavagroundzero #thelavaeffect #thelavastruggleisreal #lavaforbreakfast #lavachaser #demianbarrios #birthday

Pohoiki! Oh, Pohoiki, please don’t be gone when I look at you in dawns light. If my last memory is being embraced there by The Ohana two days ago, then so be it, but please Pohoiki, remain….. #pohoiki #puna #hawaii #gbradlewis

A month ago, I had the great honor of being invited by the Hale ohana to document Pohoiki Bay and their red shoreline cottage that has stood the test of time for more than a hundred years. We spent several quiet hours talking story, sharing life experiences, and listening to elders share funny and memorable experiences in the bay. Gentle waves and seabreeze reflected the poetic sacredness of Pohoiki. The history within each wave, stone, and shell reflected sublime beauty in such a treasured place for many. I left with a full but heavy heart imagining that Pohoiki would be taken one day by this eruption or the next. And now with that day now arriving, Pohoiki will be held in our hearts and memories as a moment and place in time that will forever be treasured. . Mahalo to the Hale ohana for their warm and inviting trust to allow me to be a part of your special day. . My respect and best wishes go out to all who have been impacted by the eruption experience. There are no words to describe the amount of loss, personal tragedy, and stress our community has been experienced. . #fissure #kilauea #volcano #bigisland #hawaii #lava #lavaflow #lavachannel #geology #pohoiki @hawaiicommunityfoundation #puuhonuaopuna #surfing @surfer_magazine @surfrider