The Lower East Rift Zone eruption continues as per usual. USGS reported during today’s morning overflight that “the channel was incandescent its entire length from vent to ocean entry.” There’s a main ocean entry a few hundred meters NE of the southern flow border with smaller pahoehoe flows on either side. The southern margin doesn’t seem to have advanced much from yesterday.

No other fissures are active, and I already covered yesterday’s 4:33 HST collapse event. I’m betting the next one will be after dark.

State Highways have put a speed limit of 25 on Highway 11 between Mile Marker 28 and 30 due to cracks in the road.

“If the ongoing eruption maintains its current style of activity at a high eruption rate, then it may take months to a year or two to wind down.”

Here’s the July 19 thermal map of the LERZ posted this morning.

Not Hawai’i, but since the rumormongers are pushing this now that they’ve decided Kīlauea news is stale:

Thursday, July 19, 2018, 6:00 am – Kilauea's lower east rift zone overflight: A huge steam plume billows from the ocean entry at Ahalanui, just a 1/2 mile from the Pohoiki.

Thursday, July 19, 2018, 6:00 am – Kilauea's lower east rift zone overflight: A new point and black sand beach were created by the advancing flow as it covered Bowls, stopping short of Shacks.

Thursday, July 19, 2018, 6:00 am – Kilauea's lower east rift zone overflight: The little island that formed off of the Kapoho coastline is now a peninsula.

Thursday, July 19, 2018, 6:00 pm – Kilauea's lower east rift zone overflight: A closeup of the overflow in the evening shows it expanding on both sides of the channel.

Q: [New report says F8 eruption could last “months to years.” Is this from movement of tectonic plates?]

USGS: It’s not a matter of tectonic plates – those move too slowly (a few cm a year) to have a direct effect on eruption duration. It’s a matter of the magma supply in Kilauea’s plumbing, and the state of the magma itself (gassy vs degassed, crystallizing vs fluid, and similar factors)

Q: [Is the cone around Fissure 8 like a scab? Is it closing?]

USGS: A cone is a result of fountaining (which happened earlier in the eruption) depositing layers of tephra around the vent. Parts of the cone have collapsed over the course of the activity at fissure 8, but that has not had an effect on the flow from the vent.

Q: [Is this going to be Kīlauea’s last big eruption?]

USGS: It won’t be Kilauea’s last eruption – not by a long shot! We can use our knowledge of how the volcano behaves – including in this eruption – together with monitoring data to forecast potential behavior, but we can’t put a date to it. Volcanoes don’t operate on a schedule.

Q: [Is there an average time it takes magma to build up?]

USGS: No, there’s no average time to build up magma. It all depends on what’s going on in the volcano’s plumbing system: where the magma goes, once it’s in the system, whether there are blockages, whether new paths open or the magma uses old ones. There are lots of factors involved!

USGS: Yes, our field crews observed them from Leilani Estates. In this event, it appeared to be mainly small, short overflows and high channel flow – not as dramatic as other days.

USGS: That would be nice…but at the moment we can’t say if that’s why or not. We’re doing as many volume calculations as we can from drone flights, so hopefully we’ll have a better idea soon.

Q: [Are they anticipating a surge after last summit collapse?]

USGS: There is some correlation to pulsation in activity at fissure 8 after Type A collapses, but itʻs not 100% consistent. We only started seeing a correlation recently. There was no correlation a couple of days ago, for instance, but there was overnight.

Q: [Are the wells covered in lava now?]

USGS: If you are speaking of PGV, no – they’re on a relatively high spot in the middle of the flow field, and most of the well pads remain untouched.

Q: [In new Fissure 8 report today, are the “lavasheds” numbered 1-8 from most to least likely like the lava flow hazard zones?]

USGS: That’s correct. Zone 1 (the Rift Zones of Kilauea) is the most likely to see volcanic activity – which it is – and the higher the number, the less likely that becomes. You can read more about the lava zonation process here: “FAQ About Lava-Flow Hazards”

FEMA: Learn what actions you and your family can take to stay safe before, during, and after a volcano erupts at https://www.ready.gov/volcanoes

[Sarcasm from Arizonan about need for volcano safety training.]

USGS: Well, maybe not for a Hawaii-style eruption. But you do have the San Francisco Volcanic Field, where the last cinder cone activity was ~1000 yrs ago (a blink in geologic time). https://volcanoes.usgs.gov/volcanoes/san_francisco_field/ … On-the-ground effects would be local, but tephra and ash could travel farther.

[Also? There are volcanoes all over the world. People travel? And so does volcanic ash; ask people who lived several hundred miles downwind from Mount St. Helens!]

Q: [How is energy release/time of summit collapse measured?]

USGS By multiple seismometers stationed around the summit and elsewhere on the island. The seismic signals can be interpreted to derive information about magnitude, energy released, type of motion occurring, etc.

Q: What are Type A events?

USGS: It’s holdover terminology from when we were observing multiple types of plumes from #Halemaumau Crater. There used to be 3 general types of plumes, with the Type A plumes heralding the largest explosive events. Now they’re what we call the M5.3-ish collapse events.

[For a while they were calling them collapse/explosions, but these events haven’t been explosive in some time, so they’ve fallen back on their in-house terminology.]

USGS: Summit mapping is contingent on weather conditions and the ability of our drone and helicopter teams to fly, so we’re not doing regular flights there. But, we’ll see what our mappers can work up as far as a summary of growth so far.

From Other Photographers / Social Media

“Treetop height” – Lavapix giving us a sense of scale.

A fast moving river of lava pours out of борозда, on what was once Luana Street, in Leilani Estates subdivision. #leilani #puna #kilauea #volcano #hawaii#gbradlewis #Pu’uʻAilāʻau #kilauealohawaii

Pohoiki under a threatening sky…. we love this place can’t imagine big island without it…. stay with us please … At this point the flow has reached Bowls, but stopped And the main flow is entering the ocean north of that closer to where the warm ponds were…. . . #leilanieruption #pohoiki #thelavastruggleisreal #thelavaeffect #surfbreak #localsurfbreaks #staywithus #punastrong #lavachaser #demianbarrios 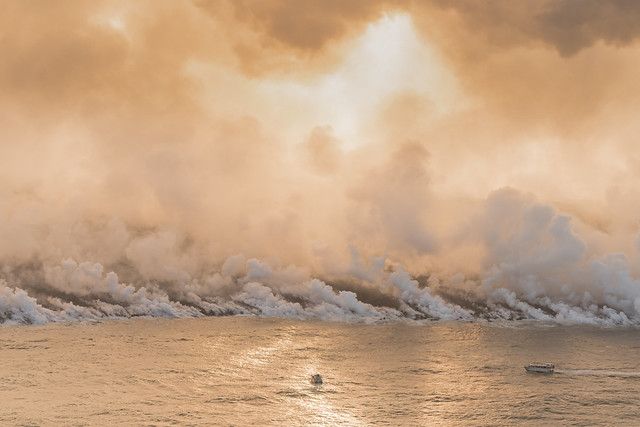