This is my transcript of the July 2, 2018 11am USGS press briefing, which covered lava-created thunderstorms, whirlwinds, and rain; laze-induced lightning; and lava boats. Additionally, Mike Zoellner mentioned findings of a sonar expedition to measure the lava extending on the ocean floor.

Soundfile is archived here. BigIslandVideoNews has also posted most of it, overlaid with recent video footage:

Mike Zoellner: So, the eruption on the Lower East Rift Zone continues. The fountains at Fissure 8 are feeding channelized lava flows that travel about 14 kilometers or 8 1/2 miles to the ocean at Kapoho. There are no overflows along the channel threatening any nearby communities at this time. The lava delta at Kapoho is greater than 500 acres in size right now, and it is expanding slightly on both the north and the south sides. It is spreading within the Beach Lots and Vacationlands subdivisions.

Some preliminary sonar data from last Wednesday [June 27] suggests that several flow lobes extending under the ocean have advanced to depths of about 100 meters below sea level at a minimum, possibly deeper, and within 400 meters of the delta edge. 400 meters is about a quarter mile.

Fissure number 22 is spattering to about 50-80 meters in height above the cone, and is feeding a sluggish flow within a few hundred meters of the vent.

At the summit of the volcano, a collapse/explosion event occurred at 1:24 this morning. It produced a plume to about 1200 feet above ground level. The energy equivalent of this collapse/explosion was equal to about a 5.3 magnitude earthquake. Subsidence on the caldera floor also continues at this time.

[Leslie Gordon mentions that Brian Shiro, seismologist, is standing by, and also that they captured a video of the June 30th collapse event posted here:

(FWIW, I’ve I’ve captured six of them from the HVO livestream — whenever one of these happens during daylight and it’s not too foggy.)

We’re getting some pretty amazing things happening over Fissure 8 and the lava river, where we have a weather situation in place that’s already favorable for showers to develop with trades that have weakened. That’s allowing updrafts to billow higher. But with an upper low to the north of the island, and the excess heat from the volcano itself, we’re actually getting a series of thunderstorms which have formed over Lower Puna. Started about 7:40 this morning, and it’s still continuing as we speak right now, with quite a few lightning strikes occurring in these thunderstorms that are repeatedly forming over the same area near Leilani Estates and across Lower Puna. Some of them have been rather intense, in fact.

So that type of cloud that you get— we see this quite often in the western United States and in the plains, where strong wildfires can create enough instability of their own to cause what we call pyrocumulus or pyrocumulonimbus (and let me know if anyone needs me to spell that), but you get those types of clouds which can produce thunder and lightning and localized heavy rain over a small area.

And we think that as the upper low moves away, and the trades begin to build back in  tonight and through the remainder of the week, that it’s going to get less likely that we’re going to see thunder and lightning coming out of these pyrocumulonimbus clouds that are forming over the fissures. So it should get a little bit more stable. We’ll continue to have some enhancement from— any showers that move through the area will get a little added boost from that extra heat at the surface going into them, but maybe not quite as dramatic as what we’re seeing today.

Another thing that’s— USGS sent us a video a little while ago of a whirlwind that’s pretty dramatic that’s throwing lava debris, I guess they said, tens of meters. And these whirlwinds— any time you have a strong updraft, and again this is something that we see quite often in wildfires out west— when you have a strong updraft like that, it can create little whirlwinds. The air is moving up so rapidly that it’s pulling surface air in from different directions around the heat source or around the fire or in this case around the lava. And as that air comes into that heat source it likes to spin. It doesn’t just come directly in. It comes in at an angle, and it begins to spin.

You can get these localized, brief, strong whirlwinds that happen. They’re not really tornadoes, or at least an extremely weak type of tornado, but they’re still quite dramatic. And we’ve seen this in both the plume over Fissure 8, as well as in the laze plume, when there’s a really bigger laze plume, and the trade winds are weak, and the clouds can billow up very vertically, you can get a series of weak waterspouts or weak whirlwinds at the base of the laze plume. So it’s all pretty interesting. It’s really neat and fascinating for us to watch, and we’re learning a lot each day, seeing how the volcano is actually impacting the local weather over the eastern part of the Big Island there.

Leslie Gordon: Robert, thank you very much. I’m glad you mentioned the video; I’d forgotten to mention it myself. I should also say— Robert mentioned that sometimes a tornado or whirlwind can pick up water like a waterspout. Well in fact in the video you can see these little whirlwinds picking up little blobs of molten lava and flinging it away. So kind of a really interesting video to watch. 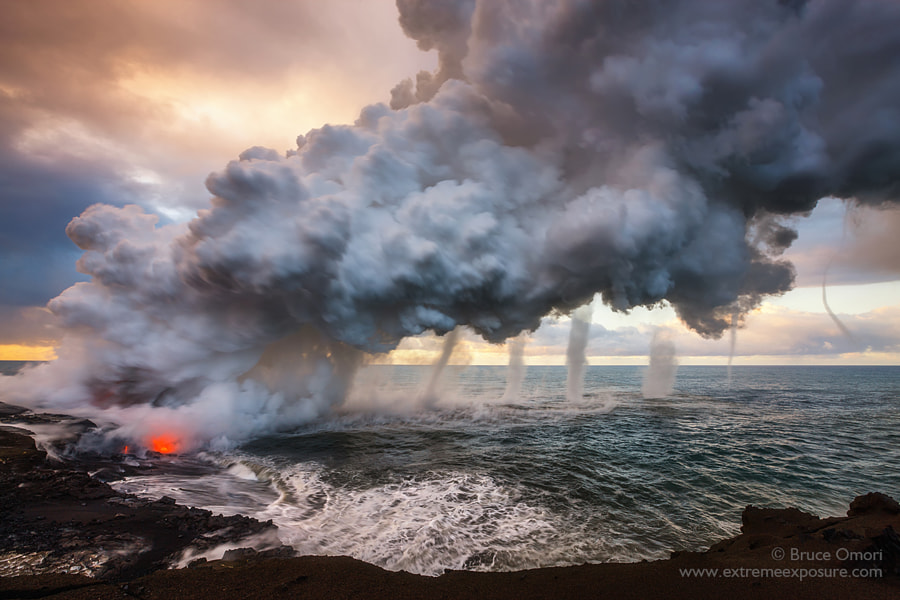 Q: How is lightning formed in the laze plume? Is it as dangerous as other kinds of lighting? Is it dangerous to lava tour boats?

Robert Ballard: You know, that’s a really good question. And I’ll preface my response with a hint of a disclaimer, that although I have seen some of that video of lightning in the laze plume, I just want to make sure that it’s well understood that I’m definitely not an expert in that phenomenon itself. Now, everything I’ve seen and all the videos I’ve seen of lightning in the laze plume in this event and in past events does not— perhaps one of the reporters or someone can correct me if I’m wrong— I have never seen an external strike. So my understanding is that these are static discharges or very weak type of lightning that forms in the laze plume, again, with a lot of moisture, a lot of billowing motion going on, you can get that charge separation— you know, like, on the mainland during the winter, when you scuff your feet on the carpet and touch a doorknob you get shocked, well it’s the same type of principle here. And again, just want to be careful that I’m not speaking definitively on this, but again, I haven’t seen any external, like cloudto water lightning, or anything that’s occurring outside the cloud and the laze plume.  So to be honest, I’m not real sure on that, but my guess is that it’s too weak to actually strike anything outside the plume. But if anybody has a video or seen otherwise, please let us know.

Q: Lava boats— how do they form? Can they escape the channel? Any implications/impacts?

Lavaboat slowly moving through the river

Robert Ballard: […] Now one thing I would mention, and I meant to mention this during the presentation, so thanks for asking, is that as long as this goes on, any future weather system that we have coming in are probably going to help to enhance the precipitation and the activity over that area for as long as this goes on. So every time we lose the trades, or we get a good moisture surge, or we have a cold upper low build in, we’re going to be more likely to see thunderstorms in that area, again, for as long as this goes on. So, something that’s pretty fascinating to us, and I think we’re a little surprised at just how much enhancement that we’re getting. But sure enough, it’s there today for sure.

Q: Is this acid rain?

Ballard: We’re not an expert in precipitation chemistry here as far as that goes. I would think that you’re adding SO2, sulfur dioxide, as aerosols for precip formation, so my guess would be yes, the precipitation in that area is going to be more acidic. But again, we’re not atmosphere chemistry experts here at the National Weather Service, and it’s a little peripheral to what we do, so I want to be careful about speaking too definitively on that. There may be others that know a little bit more about that, especially in regards to volcanic effects. But my understanding is that the downwind precipitation has been observed to be more acidic.

Q: [Inaudible, something about Highway 130 being reopened… it’s the one with cracks and steel plates across it.]

Mike Zoellner: We’ve been continuously monitoring the Highway 130 area since the beginning of the eruption, and we’ve been checking if there was any SO2 being emitted from those cracks, checking the temperatures around there. No real change has been observed in several weeks. We’ve been relaying that information to the county who, based on our information, made that decision to reopen tomorrow to all public traffic.