Excerpts from above interview:

[Double  check my transcription; I picked out quotes I thought were informative.]

Interviewer: is there any indication of where that next fissure might be?
Kauahikaua: No, but the three of them are kind of in a line, and so it wouldn’t be outrageous to expect the next to be on that same line, but we can’t say where.

Kauahikaua: The system is still pressurized, the summit is deflating somewhat slowly, the lava lake is dropping.

Kauahkaua [describing USGS instruments/monitoring]: So we’re putting all those tools to use to figure out, for example, the extent of this [underground magma] intrusion, that started up near Makaopuhi Crater [just west of Pu’u O’o] and has moved all the way down to, in the vicinity of Leilani Estates and a little bit farther east— at least. […] The intrusion itself broke a lot of ground. That’s what the earthquakes come from.

K: As far as historical perspectives, there’s obviously been a lot of activity down in the Lower East Rift Zone, but so far the one that seems the most similar is the 1955 Puna eruption, and that one erupted over several months from several different fissures that expanded over a large area. It started in the center of this area, then expanded out to a point just west of Highway 130, all the way down to Kapoho Cone. Some of those eruptions out of those fissures were quite small, not unlike this one, but some of them  were quite large with high fountaining events and lava flows that made it down to the ocean.

K: The 1955 event didn’t start out exactly like this one did. It had a bit of seismicity [earthquake activity] that ramped up very clearly before the eruption. This one, the seismicity kind of ramped up as the dike [wall-like intrusion of magma] was moving downrift, but when the eruption started, there wasn’t any kind of immediate precursor that lava was going to come up in the fissure.

K: While there is just a bit of [lava] spatter coming out, there are heavy gas emissions.

[ADDED: Here’s a USGS Map of the Lower East Rift Zone from May 13; purple marks old lava flows with dates, including 1955 flows.] 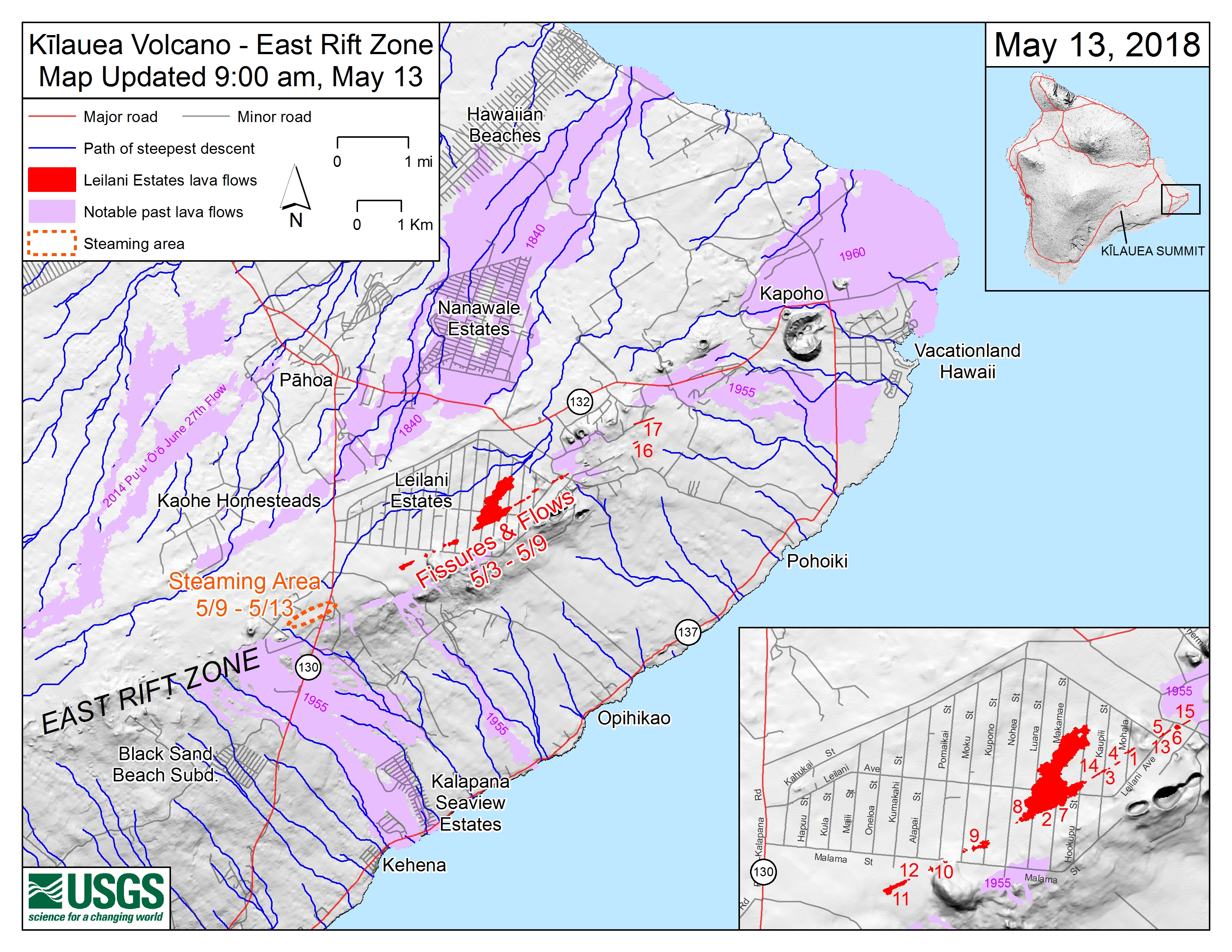