Steve Brantley (HVO/USGS): Well, good evening. Thank you for turning out. I worked really hard this afternoon to prepare my very best presentation for you tonight, and lo and behold, somehow it didn’t end up on my jump drive. So for that, I apologize. And what I’ll do is basically recount the presentation, but you’ll have to— we can refer to the map up here.

So the overall picture is that the activity at Fissure 8 has not fundamentally changed. A high rate of lava is still being erupted, and we really haven’t noticed a change in that rate. At the summit, the volcano continues to subside very slowly over time, and periodically— now about once every 30 hours, or almost every day— the ground drops as much as two and a half meters or so in each drop, and results in a ground shaking that’s equivalent to about a magnitude 5 event.

So back to Fissure 8. As I said, there’s still a high rate of effusion occurring from that fissure. The lava is pouring into the open channel that makes its way to the northeast and makes a sharp right-hand turn on the east side of Kapoho Crater.

Steve: About a week ago, or a little over a week ago, the open channel that was pouring into the ocean began to recede such that the distal portion of that lava flow was covered over with a’a cooled—  a cooled surface. And instead the lava was moving through the core of that flow and entering the ocean over a very broad area.

[July 5, Hawaii County Fire Dept, channel makes it around Kapoho Crater and then burrows into delta over former Kapoho Bay.]

Steve: Yesterday there was a blockage in the channel just upslope, or toward Fissure 8, from Kapoho Crater. [It’s] not clear exactly how that happened. Sections of the channel walls periodically will break off, and those get rafted down the lava channel, and where the channel constricts, those big blocks can end up blocking the channel and causing the flow to back up, raise up, and spill over the top. That’s apparently what happened yesterday.

[HCFD photo, July 9; helicopter is facing southwest towards Fissure 8, hovering over cinder pit with Kapoho Crater left and slightly behind in what would be the blind spot of a car’s side-mirror.] 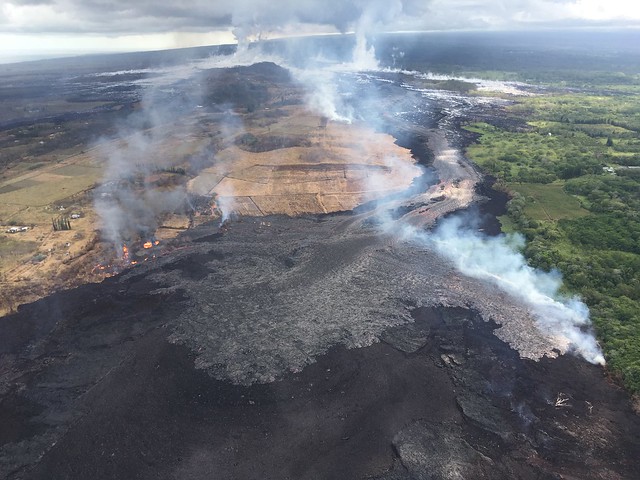 Steve: There was a bit of a flow that went to north of the quarry [flow spilling right in above photo], the Bryson’s Cone area, but that flow seems to have slowed significantly and perhaps stopped at this time.

There’s also another flow starting yesterday that started to go to the west side of Kapoho Crater, and that flow was still active this morning. And so if it continues flowing toward the ocean, it’s going to probably hug the south edge of the flow and enter the ocean.

Steve: In the past few days, the lava flow on the south side, where it enters the ocean moved a little bit closer to the Warm Ponds and to the charter school that’s located there. And yesterday it was within about 500-700 meters or so. So 1800-2200 feet or so, almost a half a mile.

[Photo by Bruce Omori, Wednesday morning. The flow reached the school and park in early evening of same day.]

Steve: Fissure 22 is just spattering occasionally, intermittently. The lava flow that was forming from the Fissure 22 slowed and stopped in the past few days, and it didn’t reach very far, just a few hundred meters.

At the summit, as I mentioned, there are still lots of earthquakes occurring, and these earthquakes tend to occur in these 30-hour, 24 to 30-hour windows that culminate in the sudden dropping of the ground. And some of our instruments are showing that it’s dropped as much as two and a half meters at a time. So that’s [gestures] way above me.

Halema’uma’u Crater continues to enlarge as the Kilauea drops and slides into Halema’uma’u.

I’d like to direct your attention to our homepage if you want to learn more about the activity at the summit. Do a search on HVO, and in the news section of the website, on the lower left-hand corner below the map, we have a link to a publication. It’s a report. It’s about 12 pages long that describes the summit activity and some of the scenarios that we think are more likely than others. So I invite you to take a look at that.

And I’ll close with one final observation that we’ve observed in the past week or two. And that is: when the summit drops— that sudden jolt, a culmination of 12 to 20 hours of earthquake activity— it seems to… when the floor drops like that, it seems to hit the top of the magma reservoir, and it sends a pressure wave from the summit area that we can detect on our instruments all the way down here in the East Rift Zone.

And then, about an hour and a half to two hours after that sudden drop and that pressure wave,  we’ve observed an increase in the effusion rate at Fissure 8, as if there’s more magma being pushed out for a short period of time as a consequence of that subsidence, that sudden jolting, that downdropping at the summit.

I want to emphasize that that increase is short-lived. It’s temporary, and so far has only led to a few occasional breakouts— excuse me— overtopping of the levees along the upper part of the channel. So it has not led to significant overflows, but it’s something that we’re sort of [finger quotes] sensitized to. And each time there’s a sudden event up at the summit, we direct our field crews to take a look and try to track any overflows that may occur from along the channel.

Thank you, and I’ll be happy to take your questions at the very end.

Note: There was one question in the question & answer session directed towards Steve here [timestamp 7:50, if that link doesn’t load the video to the right spot.]  It boiled down to, “We live 3 miles south of Fissure 8, and we have trouble sleeping because we’re scared of what would happen if Fissure 8’s flow changed direction and came towards us. We’re afraid it could reach us in half an hour. Steve Brantley, how long do YOU think it would take to reach us?” Steve Brantley  [timestamp 9:36] couldn’t give him a time because there’s too many variables, but did go into great detail about (a) the topography just south of Fissure 8 and what would happen if it turned that way and (b) how USGS has teams in the field are monitoring the flows 24/7 on foot and with drones at night so as to be able to give Civil Defense instant notice if anything significantly changes.  Talmadge Magno (head of Civil Defense) added that there was a staffed roadblock nearby, and the officers there would go door to door and make sure residents were evacuated.